Glenn Beck has been on vacation since the day of the tragic Sandy Hook elementary school shootings, so this is a good opportunity to address a different segment of the right-wing echo chamber. The right-wing media watchdogs, Media Research Center, founded by reactionary Brent Bozell. Their focus is to bring to light "liberal" bias in the mainstream, pro-corporate, nationalistic media. Hypocritically, they spout lies in their fund appeals while claiming to convey the "truth;" and they absurdly include the mostly liberal MSNBC, "the place for politics."

Beginning with the fund appeal e-mails that Bozell sent to those who subscribe to the MRC's weekday newsletter, look what he wrote in one with the subject line: "George Soros must be stopped." (Echos of Glenn Beck, no?) These are Jing copied, so the content could not be altered.

Soros is not on a crusade to "destroy Fox News, conservative talk radio, [or] any media that dare tell the truth." Soros helps fund the liberal Media Matters for America, and their primary function is to expose the false claims made in right-wing media. (They were kept very busy when Beck was on Fox "News.") They are not out to "destroy" Fox! Bozell and his fellow reactionaries at MRC either do not see their own deceitfulness (because their own bias -- like Beck's -- is so far to the right) or Bozell knows damn well that he's spouting BS in that e-mail in order to motivate subscribers to donate money to his far-right, absurd outfit. The MRC is not "America's media watchdog." It is the far-right media watchdog. He goes on to write: Five lies are contained in these three paragraphs:

What is the "Media of Mass Corruption" campaign? It is nothing more than a website MRC is using to raise money. In the "Take Action Now" box, where fear-driving conservatives and reactionaries can donate money to MRC is this gem: "The radicals running the liberal news media will not give up." The B.S. in that line comes from the fact that radicals run radical media such as the various Occupy, socialist or communist media. Liberals are reformers, not radicals. MRC: Faithfully fighting liberal media bias with BS and reactionary media bias.

Why "reactionary?" Because reactionaries are the people MRC offers to give testimonials for their efforts.

Hannity and Limbaugh are far-right propagandists, and the Tea Party is the misinformed (by Glenn Beck), reactionary arm of the Republican Party. Rush "Sandra Fluke is a slut" Limbaugh knows a thing or two about excess and bias.

In another fund-appeal e-mail with the subject line "Yo," the not-at-all hip Bozell practices pure psychological projection onto the "liberal" media. He wrote, "It's insulting to every truth-loving American that the liberal press continues to manufacture issues, bury stories, give cover to their allies, and splice and dice video all for the sake of imposing their agenda on the American people." Both Fox "News" and Beck do exactly that list of accusations! Fox and Beck (on his BlazeTV channel) tried to make the CIA approved story that was conveyed in the media by Ambassador Ric about the Benghazi attack on the Consulate a "cover up." That's a manufactured issue, and it is hardly the only one they have manufactured during the Obama presidency. Bozell adds, "It's unprofessional, dishonest and corrupt!" He is correct: Fox and Beck are dishonest, unprofessional and corrupt! For that matter, MRC can be thrown in with Fox and Beck since they are dishonest and they ignore the dishonesty and bias of the right-wing propagandists, Hannity, Limbaugh and Beck.

Further on in the same e-mail message, Bozell asserted that "the liberal media proved that they would do anything to help Obama get reelected." One example he gives is that...
That remark was taken out of context. Again, this shows just how much Bozell and his MRC are nothing more than a hard surface in the deceitful, right-wing echo chamber. Like Fox's Roger Ailes and Glenn Beck, they have an agenda which is not objective news reporting.

One more point about the absurd focus MRC has on the mostly liberal MSNBC: MSNBC is not a news outlet as much as it is, again, "the place for politics." The channel does not pretend to be objective any more than Fox does. They do not pretend to be "fair and balanced" the way Fox does. For MRC to criticize them, or any show that is political and not just reporting of news such as NBC's Meet the Press or The View, for having a liberal bias is just absurd, and yet they do this, over and over. It would be equally absurd to point out that Beck's employee and MSNBC co-host of The Cycle, S. E. Cupp, is conservative. As Glenn Beck likes to say “Well, duh!” Just a few examples are offered below to demonstrate how ridiculous MRC's criticisms can be. MRC staffers appear to really seem to hate Chris Matthews who is not a journalist nor host of a news program.

Face the Nation is an opinion and current events discussion show with conservative and liberal opinions expressed.

Morning Joe is an opinion and current events discussion program on MSNBC with conservative and liberal opinions expressed.

Chris Matthews is liberal!?!?! Seriously? Get out the torches and pitchforks! PoliticFact noted that "The final Congressional Budget Office baseline deficit projection before Obama took office -- noted in table 5 in this January 2009 CBO report -- showed a fiscal year 2009 deficit of $1.19 trillion." [Emphasis added] David Gregory was correct, but MRC used this exchange to deceitfully make him out to be "biased." In reality, MRC often sees "bias" in the facts of a given matter. Stephen Colbert's observation holds here: facts have a liberal bias.

It would be a political constructive ideal to have a media watchdog pointing out bias in the news reporting of the proclaimed objective news outlets, i.e., ABC News, CBS News, NBC News and CNN. MRC could be helpful if they were honest, objective and balanced instead of dishonest, reactionary and one-sided. Instead, the right-wing MRC is part of the problem, part of the deceitful, right-wing echo chamber. They ignore the lies, false claims and bias from their like-minded propagandists, and therefore Bozell's MRC is just as guilty of misinforming their readers as Beck and Fox's CEO Roger Ailes are for intentionally misinforming their viewers.


Update, 1/1/2013: This piece is already lengthy, but Bozell keeps putting out fund-appeals that warrant mention. On Dec. 29th, Bozell put out an "Important Video Message from the Media Research Center." From their YouTube site:

There is a lot to comment about here, but two points are noteworthy. Bozell doesn't mention the extent to which the conservative media worked on Gov. Romney's behalf. Glenn Beck encouraged his followers to get actively engaged with FreedomWorks and to work to get Romney elected, not to mention how much Fox "News" gave favorable coverage to him while never ceasing to undermine the President. Mr. Bozell practices double standards! Also, the idea that Obama has a "socialist, second term agenda" is laughable...and pure B.S. Obama is a moderate to the core! How ironic then, that this video begins with the delusional claim that MRC is "citizens demanding truth in media." Mr. Bozell is a hypocrite!

Despite the fact that MRC reached their goal of raising $50,000 from other reactionaries, in yet another delusional fund-appeal from Dec. 31st, Bozell claims that "The Liberal Media Demonizes Conservatives -- You Can Stop Them." No, they cannot because MSNBC, the only genuinely liberal source of media on television, will push back against the deceitfulness of the people in the media like Brent Bozell, who is more reactionary than conservative as indicated above.  In that same e-mail, Bozell writes, "As the president begins his second term, I fully expect the liberal media to continue propping up their allies in the White House while demonizing conservatives and anyone else who disagrees with their socialist agenda." Bozell attacks the "credibility" of the so-called "liberal media" while spewing nonsense like this, thereby undermining his and MRC's credibility. Of course, his target audience, other reactionaries, probably agree with him and therefore cannot see the B.S. and hypocrisy of these extremist "watchdogs" pretending to criticize liberal bias in the media while actually pushing a far-right agenda. 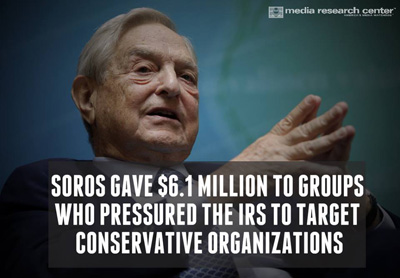 Then a link was offered, We've got to Stop Soros Now!, that did not try to explain this bizarre and deceitful claim. They just ask for money from reactionaries ignorant of the truth and gullible enough to hand their money to the Mendacious Reactionary Collaborators.

Via MSNBC, this is a clip that explains that no groups pressured the IRS to target conservative organizations!

The MRC, and Brent Bozell in particular, are LIARS! When they claim to have concerns about the truth, it is as absurd as Glenn Beck making the same deceitful claim.

Posted by The Glenn Beck Review at 9:10 AM