As if the horrible Citizens United decision did not make this election unfair enough, Tagg Romney, who recently expressed a desire to take a swing at President Obama and the son of Republican presidential candidate Mitt Romney, has purchased electronic voting machines that will be used in the 2012 elections in Ohio, Colorado, Washington, Texas, and Oklahoma. 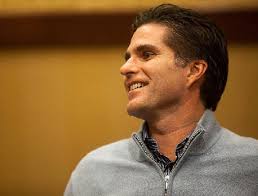 Taggart Romney
"Late last month, Gerry Bello and Bob Fitrakis at FreePress.org broke the story of the Mitt Romney/Bain Capital investment team involved in H.I.G. Capital which, in July of 2011, completed a "strategic investment" to take over a fair share of the Austin-based e-voting machine company Hart Intercivic," according to independent journalist Brad Friedman.
Friedman is not the only one to discover the connection between the Romney family, Bain Capital, and ownership of voting machines. Truth out reports:

Through a closely held equity fund called Solamere, Mitt Romney and his wife, son and brother are major investors in an investment firm called H.I.G. Capital. H.I.G. in turn holds a majority share and three out of five board members in Hart Intercivic, a company that owns the notoriously faulty electronic voting machines that will count the ballots in swing state Ohio November 7. Hart machines will also be used elsewhere in the United States.

In other words, a candidate for the presidency of the United States, and his brother, wife and son, have a straight-line financial interest in the voting machines that could decide this fall's election. These machines cannot be monitored by the public. But they will help decide who "owns" the White House.


This was discussed on The David Parkman Show:


The Nation, Politicol and New York Times confirm the connection between the Romney family, Solamere and the Bain Capital investment in the voting machine company, Hart Intercivic, whose board of directors serve H.I.G. Capital. Truth out added:

The investment comes in part through the privately held family equity firm called Solamere, which bears the name of the posh Utah ski community where the Romney family retreats to slide down the slopes.

Raising further questions of legitimacy in the Romney campaign is an audio recording recently made public, where Mitt Romney is heard asking independent business owners to apply pressure to their employees to influence their votes. At the end of the call, Romney urged business owners to relay their thoughts on the election to their employees. Romney said on that call:

What has also been made public are the emails those employers have sent to their employees with an implied threat that if they don't vote for Romney they may lose their jobs. Can you imagine the uproar from Beck and the rest of the right-wing media if President Obama made a similar request to all federal government department heads?

Voter ID and voter fraud have been top issues in the 2012 race, as have claims of Republican voter suppression. Mr. Romney's campaign has also been the subject of controversy over misleading ads, false claims, sketchy math on his tax plan, and overall vagueness on women's rights and other hot button issues. And Glenn Beck, professional liar, has the gall to claim that Obama is "lying."

this guy is no "statesman," no matter what Mitt Romney thinks
What it all says is that Mitt Romney, with the help of his family and Bain Capital connections, is more than willing to try to take the White House through illegitimate and highly unethical, if not specifically illegal means.
If Mitt Romney truly has the qualities that American voters want in their president, why does he have to go to such great and questionable lengths to try to win the election? Yet there is an irony in the Romney campaign that cannot be ignored. For all the noise the right-wing has made in questioning the legitimacy of Obama's presidency, there have been so many questionable efforts made to help put Romney in the White House, if he wins, there should be great dispute over whether his election could ever be called genuinely legitimate.
For more on this campaign for the presidency, check out any of the posts published here below:
If you doubt that Romney is trying to lie his way into the White House, check out the 49 lies listed on just one of 39 web pages listing his many false claims. See "Chronicling Mitt's Mendacity, Volume XXXIX."

Update, 10/29/2012: This concern has been addressed at Snopes.com. After a lengthy examination of the facts, they conclude:

Rest assured that there will be no corruption from the Romney's on election day.

Update, 10/23/2012: There is a petition running asking Attorney General Holder to investigate Tagg owning the company programming voting machines. Please add your name to it:
http://www.change.org/petitions/attorney-general-eric-holder-investigate-tagg-romney-owning-voting-machines-in-ohio

Update, 10/21/2012: A piece from Reader Supported News entitled "Does your E-vote now belong to the Romney family" about this same story concludes:


Does this mean the Romney investment in Hart Intercivic through H.I.G. Capital and Solamere will yield it not only financial profits but the White House itself?
Tune in during the deep night of November 7, when the electronic votes in swing state Ohio are once again opaquely reported to the nation and the world, without meaningful public scrutiny or legal recourse.
Before voters are taken in by Mitt Romney's mendacious manner,
get involved
Post a comment
All non-spam comments approved
Free speech is practiced here
------------------------------------------------------
Please get involved for 10 minutes
Share this URL with your friends
http://sharethisurlaboutglennbeck.com
Thank you
Posted by The Glenn Beck Review at 3:34 PM