The following piece is being reprinted here with permission of the author at Fox News Boycott. It was originally published on July 1st under the title "Roger Ailes secret plan for GOP propaganda TV." This background information helps explain why Ailes explained that Beck was not forced away from Fox just because of anything he had said on his show.

Before launching Fox  Channel in 1996, FNC President Roger Ailes was a media strategist for Republican Presidents, Nixon,  and H.W. Bush as well as a producer for  (see GOP Connections to Fox News page). It should be of little surprise to learn that Ailes would like nothing more than to push GOP propaganda onto Americans via a right-wing TV news channel, like Fox News. 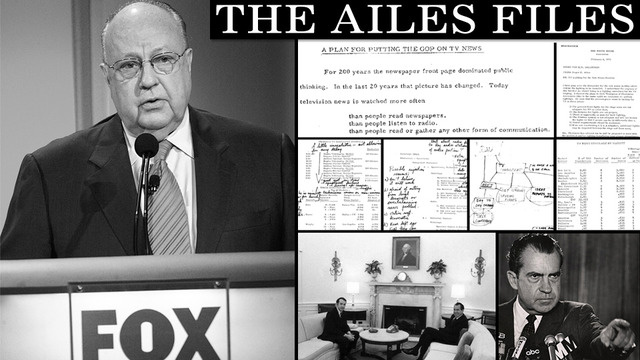 A 300+ page  of documents obtained by Gawker from the Nixon and Bush presidential libraries includes a  titled, “A Plan For Putting the GOP on TV News.” The 15 page plan includes the opinion that “People are lazy. With  you just sit—watch—listen. The thinking is done for you.”

Knowing the differences between news and entertainment programming and the relative difference in rules, the plan was to circumvent the system and get GOP opinions into what they believed to be the “liberal media” and therefore delivered by who they saw as the enemy. Just as Fox News continues to claim to be the opposition to the mainstream media (of which they are part).

This is a plan that places news of importance to localities (Senators and representatives are newsmakers of importance to their localities) on local television news programs while it is still news. It avoids the censorship, the priorities, and the prejudices of network news selectors and disseminators.

The memo included handwritten notes from Roger Ailes, clearly stating his interest in making the plan a reality. Not only that, but using his media consulting experience to suggest changes and address possible repercussions.

Notes written by Roger Ailes in the margin of the memo.

Basically a very good idea. It should be expanded to include other members of the administration such as cabinet involved in activity with regional or local interest. Also could involve GOP governors when in DC. Who would purchase equipment and run operation—White House? RNC? Congressional caucus? Will get some flap about news management.

Ailes wanted in… here’s his note to Nixon Chief of Staff H.R. Haldeman:

Bob—if you decide to go ahead we would as a production company like to bid on packaging the entire project. I know what has to be done and we could test the feasibility for 90 days without making a commitment beyond that point.

The first version of the plan was to be called “ .” After Roger Ailes was fired by the White House, he was involved with Television News Incorporated (TVN), seemingly the subsequent version. As reported by Rolling Stone, TVN was financed by the President of Coors Brewing Co., Joseph Coors, and “was designed to inject a far-right slant into local news broadcasts by providing news clips that stations could use without credit—and at a fraction of the true costs of production.”
The documents obtained by Gawker include other “dirty tricks” memos. A memo from Roger Ailes to Haldeman involves a scheme to infiltrate a political opponent’s organization – “I would like to see us get one of our people inside the Wallace organization immediately.” There was also evidence of a “news” piece to be directed by Ailes and financed by a pro-Nixon front group that would have used two pro-war Democrats, who he calls “dupes for the administration,” to respond to a CBS News special.

Ailes was working on as a response to an anti-war CBS News special.
As you can clearly see, these examples demonstrate a direct GOP connection between Roger Ailes (American president of Fox News Channel) and a plan to air GOP propaganda on TV, disguised as news, plus other dirty tricks involving media manipulation. “Fair and balanced?” Really?
For a summary about Glenn Beck, see "Becoming Paul Revere"
Posted by The Glenn Beck Review at 4:36 AM