The perfect teacher knows and manipulates the needs of his students


Previously, a guest perspective here by William Holden, "Why Glenn Beck isn't crazy and millions of Americans believe him," conveyed the psychology behind Beck's effective manipulation of his viewers. In this follow up, Holden elaborates on Beck's technique by analyzing his Valentine's Day show on Fox.
If someone tells me today: “You are a demagogue,” I answer him in this way: “Demagogy in the good sense is simply the ability to get the masses to understand what I want them to understand.”
~~Joseph Goebbels
January 9th 1928 in his speech “Knowledge and Propaganda” to party members in Berlin (1)

At the beginning of the remarkable speech Goebbels stated: “Propaganda shows that it is good if over a certain period it can win over and fire up people for an idea. If it fails to do so, it is bad propaganda. If propaganda wins the people it wanted to win, it was presumably good, and if not, it was presumably bad.” As much as I like to replace the terms good and bad with effective and ineffective Goebbels' words deserve to be taken very seriously because he names the element which separates the pros from the amateurs; and, more importantly, Goebbels makes the point that propaganda can not be a matter of theoretical discussion. Propaganda can only be discussed by concrete examples as for instance Glenn Beck. 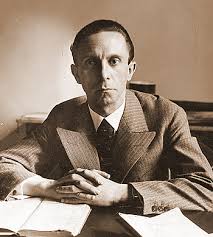 Glenn Beck and the people who work with him are without a doubt pros. Millions of Americans understand what Glenn Beck wants them to understand. Still, the impression remains that is far more convenient for large parts of the public and media to call him “crazy” than to address the question why he a successful propagandist and skillful demagogue.
From my observations I strongly feel the hierarchy of needs model by Abraham Maslow is key to the success of Glenn Beck. Obviously, a propaganda operation like Glenn Beck´s is a complex enterprise and many factors shape it. I named several previously like The God Factor, The Gut Factor or The Visual Factor.


Naturally Beck´s propaganda exhibits also the propaganda techniques identified by the Institute for Propaganda Analysis in 1938: Name-Calling, Glittering generalities, Transfer, Testimonials, Plain Folks, Card Stacking, Bandwagon. Most of these techniques if not all of them are part of the Glenn-Beck-phenomenon. [Emphasis added] Though the seven mentioned propaganda techniques provide another helpful tool in understanding and debunking Glenn Beck, they fall short to explain why Name-calling or Card Stacking works. The hierarchy of needs is of more merit in that regard in my opinion. 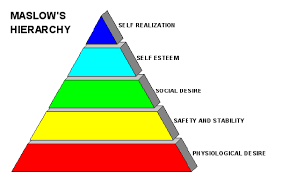 The work of Abraham Maslow has been widely adapted by the advertising business and what else is propaganda than the most extreme form of political advertising: Make the masses understand what you want them to understand.
On February 14 Glenn Beck opened his show with the words: “Well, hello America. Inflation and food prices and Google's connection to Egypt. It´s actually...” The words inflation, food prices, Google and Egypt have been written on the chalkboard before the show. It seems a very odd choice to start the show by mentioning inflation and food prices for no obvious reason, but it is just another exercise in working with the hierarchy of needs. Inflation and food prices mentioned together suggest the supply with food could be in danger. Beck starts his show intentionally on a imaginative threat to one of the physiological needs: the need for food. Later he goes back to it claiming that food prices are going to skyrocket and orange juice is going to become a luxury item. Furthermore, in his comment that "orange juice will become a luxury item," Beck failed to mention the disease that is ravaging the Florida citrus industry. That doesn't fit in with the anti-Obama narrative of this episode's propaganda. Beck often deceives by what he does not convey.
Quite cleverly, Beck stops from explaining in the beginning what exactly he means. He leaves the sentence unfinished because possible problems with food supply scares the audience and will keep most of the audience very likely motivated due to their physiological needs to watch the rest of the show. Very similar to what is known as a cliffhanger from movies. The connection between Google and Egypt creates an intriguing question: What is going on with my search engine and Egypt? If you look for orientation now Beck is the guy you are looking for.


Perfectly timed he turns around to the other chalkboards where he proves what a reliable guy he is. This brief segment is excellently directed and written as almost any Glenn Beck Show. The camera follows Beck as the audience should do the same. Beck says even: "Come over here." He will be your guide and teacher. Next move, he places the word change under inflation, food prices, Google and Egypt. He emphasizes that President Obama used change as campaign slogan. Almost all of the rest of the show is devoted from that point on to the security and safety needs.
Beck starts with the word change and ends on the frightening picture of all the institutions and people who are working for change after Beck declared boldly democracy is the “rule of the mob” and the government has conspired with numerous groups to help the Muslim Brotherhood.
Safety needs are needs for stability, security, law and order. In Beck´s scenario everything is destabilized by the government that should be the ultimate guardian of stability, security, law and order because they are working to together with the group that seeks to establish a worldwide caliphate, the rule of sharia law and one of them even talks about cutting the President´s nose off and "that tongue will be cut off." Ironically, that is the same President who is supposed to work together with the very same man in destabilizing the Middle East. The permanent and repeated fear-mongering is nothing else as the successful manipulation of the security and safety needs.
Interestingly, Beck briefly introduced on the same show something called “get connected”. Once more proving his close ties to the Tea Party movement and his role as main propagandist for the Koch brothers funded political movement, he is promoting the “freedom connector” at his website. So here we have the next tool for dealing with the loving and belonging needs (social desires on the above image) of the audience. Beck almost orders his viewers and listeners to get connected. It is an astounding, early effort with regard to the 2012 elections to organize the mobilized and motivated viewers and listeners of Glenn Beck by giving them a place where they belong. Directing the masses to a political platform with clear political goals can only work if the masses are motivated to participate, and Glenn Beck does his best to motivate them with the help of the hierarchy of needs. In this case it is need for belonging, being connected, that is being tickled and taken advantage of for a concrete political goal.
The esteem needs were notably absent for most of the show except for the one remark when Beck called the President´s budget proposal “insulting”. What could be insulting about a budget proposal? Who can be insulted by a budget proposal? In other words the President still will not respect “true Americans” or as Beck once put it: “That's the only thing this president hasn't done, is just urinate on us."(2)  The choice of words is exactly aimed at manipulating emotions. “Urinate” and “Insulting” are only two of many, many examples for selected strong phrases to provoke negative reactions.
A basic, often executed, very effiecient method Beck uses is to represent the exact opposite of the threats to the needs of his audience. In the beginning of the show he set up his role as trustworthy teacher who guides the audience through the chaos satisfying their need for orientation and security. Different need, same method applies here.
By only adding the word “insulting” Beck paints the President again as someone who acts against the audience’s needs. In this case the need for esteem. In contrast to the President Beck does not only express care about their orange juice; before the show ends he points out the only ones missing in his show were the viewers. But of course Beck never forgets about them and shows respect by simply demonstrating he is thinking about them.
Self-actualization might not have been an issue on this particular show, but it is enough to just mention the four e´s that are placed prominently in every show: Enlightenment, Education, Empowerment and Entrepreneurship. Also his slogan “Be who you were born to be” is a reminder of the permanent stroking of the need for self-actualization. Maslow used only slightly different words: “What a man can be, he must be.”, Maslow wrote. There is also something called “Glenn Beck University”. An university is historically the institution and the place where self-actualization can be achieved.
Due to Egypt it is almost forgotten now that Glenn Beck began the year with a passionate speech about taking a new direction which was the big opening of the “e4-solution”. Beck declared: “I will no longer look to others for leadership or answers. I will lead my family and teach them to be independent, honorable, educated and charitable. With firm reliance on the protection of Divine Providence I choose to ReFound this amazing nation by rediscovering within myself, and my own circle of influence, the principles and ethics that defined American exceptionalism.”(3) announcing the E-4 solution
One important element for Beck´s success is that he presents the image of a person that has reached self-actualization. Enlightenment, Education, Empowerment and Entrepreneurship are all visible in his biography if his accounts are believed to be true. The teacher teaches the things he seems to truly know of presenting himself as living proof of what can be gained by following his advice while in fact the perfect teacher is a manipulative demagogue knowing and manipulating the needs of his students.
1)  http://www.calvin.edu/academic/cas/gpa/goeb54.htm
2)  http://mediamatters.org/mmtv/201005200011
3)  http://www.glennbeck.com/2011/01/04/glenn-beck-fundamental-transformation/
Posted by The Glenn Beck Review at 4:33 PM

Astute observations rife with fragments and other errors. Mr. Holden, I am available to edit your pieces for spelling, grammar, and mechanics any time.