"I have no idea what I'm doing with the economy...."
~~Glenn Beck
Glenn Beck Show, 11/26/10
This is part IV of XXI of a detailed analysis of Glenn Beck's newest book, Broke: The Plan to Restore Our Trust, Truth and Treasure, co-written with the help of Kevin Balfe. Keep in mind that it was published on 10/16/11, one month before Beck admitted complete ignorance "with the economy." Chapter 4 is entitled, "The Nineteenth Century: Old Hickory, Honest Abe, and Harpy Fangs." It continues Beck's review of federal debt and offers different politician's views on debt. It is presented with the spin of a small government reactionary, of course; but it is also flawed and seemingly blind to the hope-inspiring history of debt repayment. 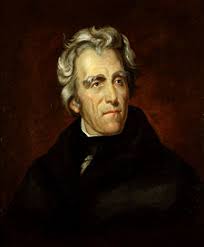 President Jackson
Beck begins this chapter with a quote from Old Hickory, President A. Jackson. Like Jefferson, Jackson held "an inflexible determination not to enlarge the income beyond the real necessities of Government and not to increase the wants of the Government by unnecessary and profuse expenditures."(1) A question that will have to be asked when Beck unveils his (or God's) plan in later chapters will ask what is necessary for modern, 21st Century government. 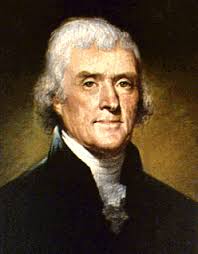 President Jefferson
Throughout the book Beck offers what he calls A.D.D. moments, sidebars with little tidbits of brain-fade; but in this chapter he has two identical side-circles that quote Jefferson in 1803(2) and again five pages later with the exact same quote dated 1831!(3) In the Citations ( that Beck has bragged about on his show, the notes indicate that the quotation about Congress paying debts without raising taxes came from Jefferson's State of the Union Address in 1903!(4) Either Jefferson was prone to repeat himself, including during speeches on dates that he did not give a speech, or the second date and the Citations were the result of sloppy scholarship, an A.D.D. moment indeed!
Beck claims that "railroads and canals were starting to rapidly expand--though back then is was private industry that led the way, not the government."(5) Beck cites the Great Northern Railway "as the most profitable,"(6) but where the funding for the Erie Canal came from. (Hint, New York State was run by a government that paid for it.)(7) Not all that Beck conveys in Broke functions as fact, but that's how Beck rolls.

An example of spin on the facts of history is conveyed when Beck offers a modern interpretation of "harpy fangs." Harpies were creatures of Greek mythology and "employed by the gods to punish crime on the Earth."(8) Supposedly a supporter of Jackson called the idea of mounting debt "harpy fangs." Beck's spin: "Debt slowly sucks the lifeblood out of a republic, all while beautiful harps play a melody in the background. You are so happy and content with all of the "free stuff" being handed out that you don't realize you will soon be dead."(9) Another modern-day interpretation comes from dream analysis: If Beck is attacked in his sleep by winged women with fangs often enough, maybe he'll stop his lying and tone down his violent rhetoric. Now THAT is dreaming!

cherry picks history
The biggest debt acquired in the 19th Century was accumulated during the Civil War. In 1865 the debt stood at $2.8 billion, compared to $127 million just after the War of 1812. Beck wraps this chapter up by noting that the federal government ran surpluses for 28 straight years after the war, and by 1900 the "debt had almost been paid off entirely."(10) He then adds that "by 1916 the total national debt stood at $1.2 billion, 56 percent below its high."  Two points: 1) How is half of the debt left "almost ... paid off?" And 2) it took 51 years to pay off 56% of the Civil War debt. Large debts, like the debt of WWII and our current, growing debt, required multiple generations to repay in times of a healthy, growing economy.

Another bit of Beck's reactionary spin on the facts opened this chapter when he asserted that "our leaders view debt as a national blessing that can cure all of society's ills."(11) No amount of research can confirm that claim or find any politician describing debt as a "blessing," at least not since Alexander Hamilton explained the need for the United States to establish good credit. The question in the coming months is whether the Beck inspired tea party members of Congress will destroy the good credit of the United States or vote to extend the debt ceiling.