"I have no idea what I'm doing with the economy...."
~~Glenn Beck
Glenn Beck Show, 11/26/10
This is part III of XXI of a detailed analysis of Glenn Beck's newest book, Broke: The Plan to Restore Our Trust, Truth and Treasure, co-written with the help of Kevin Balfe. Keep in mind that it was published on 10/16/11, one month before Beck admitted complete ignorance "with the economy." Chapter 3 is entitled "The Founders, A Revolutionary Way to Think about Debt." It includes what you would expect from Mr. Beck. If you're a supporter, he and Balfe reinforce your fears about debt. If you're a person with critical reasoning, there is plenty in chapter three to point at and say, "wait, that doesn't add up." 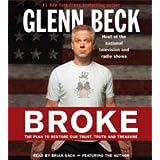 Beck begins this chapter by asserting that "riots were a regular occurrence."(1) Beck claims this to point to one in particular that John Jay became a victim of (brick to the forehead). This is known as the Doctor's Mod Riot, but "historian" Beck does not pass that tidbit along. Wikipedia lists 8 riots from 1773, The Boston Tea Party, until the turn of the century with two five year gaps. A critic might question the word "regular" in this claim.
At any rate, on the same page, Beck makes a more controversial claim: "Many say that God's hand can be found everywhere in America's founding."(2) Many also say that man's hands are found everywhere in America's founding. When it comes to claims that are grasped in the imagination, one cannot point to any facts and show where the claimant is right or wrong. For Beck, God apparently threw the brick that hit Jay, one of the authors of The Federalist Papers, in the head. Beck brings up Jay because of his fixation on preventing the new nation from becoming debt-riddled.
The real deficit hawk among the founding fathers was Thomas Jefferson. Beck opens the chapter quoting Jefferson and later adds that he wrote, "To preserve our independence, we must not let our rulers load us with public debt."(3) In an era, 200+ years later when independence has given way to interdependence on matters of security (NATO and other alliances) and economy (trade relations), independence is indeed a quaint notion. Still, Beck "quotes" Jefferson again: "Look, if I want to build a swank mansion with a sweet dome at Monticello with my own dough and roll my own financial dice, so be it. But I'll be damned if I'm going to swipe your wallet to fund my pet political projects. That's theft. That's wrong."(4) Of course, Beck not only deceptively put those words in Jefferson's mouth, they are not at all an accurate reflection of history. Apparently Beck conveniently forgot the Louisiana Purchase. Jefferson authorized the purchase of New Orleans, but when his negotiator arrived in Paris, the whole, vast territory was offered for $15 million, about 3 cents an acre. The U.S. paid a deposit of $3 million in gold and the rest of the money was raised by selling bonds, i.e., by going into debt!(5) Seeing Beck put those words into Jefferson's mouth makes one suspect that Glenn Beck, tea party "historian," just doesn't know very much about actual history. How else to explain Beck's lack of understanding that Jefferson put the federal government into $12 millions worth of debt (about $175 million in 2010 dollars) for his "pet project?"

One section of this chapter is entitled "There's no such thing as a coincidence." First, that's a bizarre claim that he makes on his show on Fox. Of course some coinciding events are just that, coincidences. More interesting for the purpose of critical review, the section under scrutiny does not make mention of any set of events that might be considered coincidence except, perhaps, for his claim that most of the Founders "had been inspired by...economist Adam Smith." To support this claim, Beck points out that Jefferson had recommended The Wealth of Nations as the "best book on economics."(6) If most Founders took Jefferson's recommendation and read Smith's book, that doesn't add up to a suspected coincidence. Beck offers no proof that "most" of the Founders did actually read anything by Smith, just that they had a book recommended to them. If the title of this section of the chapter had any relevance to the page long, three paragraphs contained therein, it would be that The Wealth of Nations was originally published in 1776, a fact that Beck didn't mention! If that is evidence of "God's hand...in America's founding" and not a coincidence, it would have warranted mention. There are sidebars throughout the book called "A.D.D. moments" with various little ditties. Much of this chapter, if not the whole book, strikes this reviewer as an A.D.D. (attention deficit disorder) event. Nonetheless, loyal tea party followers will likely read this and think it profoundly important and share it with neighbors, friends and relatives.

In this same section is another A.D.D. moment that is passed off as a cited quote. Beck/Balfe write, " 'The weight of self-government,' the Federalist declared, 'was a burden to which the Greed and Roman Shoulders proved unequal.' "(7) In the Citations, these words are credited to "Anti-Federalist No. 3."(8) The entire quote from the anti-Federalist was, "Alas! I see nothing in my fellow-citizens, that will permit my still fostering the delusion, that they are now capable of sustaining the weight of SELF-GOVERNMENT: a burden to which Greek and Roman shoulders proved unequal."(9) The argument being made has nothing to do with debt or the federal budget, but Beck used this anti-Federalist assertion about "protecting...all natural rights" to add that debt, "the Founders knew, was a surefire way to end it."(10) Careful examination of this one disaster of research and writing indicates that the section was written by someone riddled with attention deficit disorder. No coincidence there!


In a section called "The War on Debt," Beck describes that the British were trying to "trash" a fund-raising effort to fund the War of Independence by spreading lies and misinformation, "a monetary jihad," about bonds being sold by the colonists. Beck then notes, without a hint of irony, that "the public realized it was propaganda."(11) If the far better educated public of the United States today -- the 10 million of Beck's listeners and viewers -- don't recognize propaganda coming from Beck, it's hard to imagine that was the realization that motivated "people of all kinds...snatched up the [war] bonds." More likely, people then funded the effort for the same reason American bought war bonds in WWII, i.e., hatred and/or fear of the enemy.


As the chapter continues, Beck offers three "teachable moment" that are actually bits of propaganda. In the first, he hypothetically claims that if Oliver Stone were to direct the movie that contrasted the styles of Alexander Hamilton and James Madison, he "would've probably hired Burr as a hit man."(12) Burr killed Hamilton in a duel. In the next "teachable moment," Beck notes that economic growth slowed in the 2000's to about 1.9% without mentioning the concurrent Bush tax cuts. He continues to show how different growth rates will dramatically effect the Gross Domestic Product in 70 years without noting that even the low figure of $66.9 trillion(13) would make our current national debt of about $14 trillion quite manageable during that 70 period of growth. (That little tidbit doesn't fit in with the theme of his propaganda, that we're in a financial crisis.)  The last "teachable moment" of the chapter compared the federal debt in Washington's days ($225/person) to what it is now ($43,000/person). He add, "If this were a game show where I could choose the government showcase or the cash, I'd take the cash." What cash? He is talking about debt without mentioning that what each person on average "owes" through future taxes will be paid over generations of growth and taxed incomes.