How does Congressman Glenn Beck Sound?


The following piece is reprinted here in its entirety with permission of the author, Karl Frisch. "How does Congressman Glenn Beck Sound" was originally published in The Cagle Post on November 24th.

In just a few weeks, Republicans will take control of the U.S. House of Representatives for the first time since the 1994-midterm elections brought them to power after nearly half a century in exile. 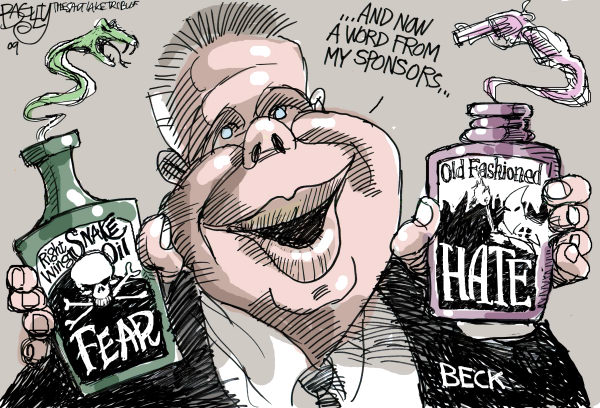 The freshly minted majority knew just who to thank for its 1994 victory: nationally syndicated conservative radio host Rush Limbaugh. With great fanfare the GOP bestowed upon its cheerleader the unique title of honorary member of Congress.
It was quite an honor given the right-wing talker’s long history ofmisogynistic, racially charged, homophobicand all-too-often patently false commentary. Though I guess it would be hard to argue that anyone other than El Rushbo did more to sweep Republicans into power 16 years ago.
So, if past is prologue, who will Republicans credit with such accolades this time around?
My money is on Glenn Beck, Fox News’ resident crew cut conspiracy theorist. He above all others embodies the mentality of the tea party crowd swept into office earlier this month.
Think about it.
It was Beck who said President Obama was a “racist” with a “deep-seated hatred for white people.” How many racially charged rally signs have we seen at tea party events across the country? More than a few. How many tea party leaders have been forced out following a racist outburst? Again, more than a few.
As Forrest Gump might say, Beck and the fringe tea party movement go together so well, they “was like peas and carrots.”
From the time that Beck jumped to Fox News from CNN’s Headline News in 2009, he has led the charge against Obama and Democrats in Congress like no one else — which says a lot given the network’s status as the de facto communications and organizing arm of the Republican National Committee.
When the Republican Party was in shambles after losing control of both the House and Senate in 2006 followed by the White House in 2008, it was Beck who went about building and promoting the tea party movement and his own 9/12 faction. All of which culminated in his rally at the Lincoln Memorial that hijacked the anniversary of Dr. Martin Luther King Jr.’s famed “I have a dream” speech.
Beck’s promotion of these fringe festivals provided the ground troops a distraught, depressed, and lethargic Republican Party needed to mount the massive ground campaign necessary if there was to be any hope of success for the GOP in 2010.
Heck, the Republican majority shouldn’t just make Beck an honorary member of Congress for all of his hard work, it should elect him president of the incoming freshman class.

It would be the closest Beck could ever get to any presidency.
To cut down on costs associated with traveling back and forth from Congress to his Fox News studio, Beck could even share a Capitol Hill apartment with Alan West who was elected to Congress from Florida on November 2. West, whom Beck has described as “a man of integrity,” has quite the sordid past.
Representative-elect West assaulted a detainee in Iraq during an interrogation while he served in the U.S. Army — military officials say his actions violated the law. Worse still, West is a fan and defender of the Outlaws Motorcycle Club, which, according to reports, has been “targeted by the FBI” for such things as “racketeering” and “attempted murder.”
In no time at all Beck and West could be hosting dinner parties for right-wing Beltway luminaries while calling themselves roomies and concocting Venn diagrams tying the President Obama to Fidel Castro, Mao, and Satan.
For the sake of our republic, I hope that Democrats and sane Republicans won’t be yielding the floor to “the gentleman from Fox News, Mr. Beck” next year or anytime soon for that matter.
Posted by The Glenn Beck Review at 3:20 PM