Interview with The Backlash author, Will Bunch


In his new book, The Backlash: Right-wing Radicals, High-Def Hucksters, and Paranoid Politics in the Age of Obama, author Will Bunch cast Glenn Beck as the central character of this movement. Bunch was kind enough to engage in an interview with The Glenn Beck Review conducted on Facebook. It follows this promotional video.
In the Acknowledgements at the end of this book, Bunch wrote that he:


...was interested in the Tea Party before there even was a Tea Party. It was the fall of 2008, before the presidential ballot was even cast, when I began trying to get my arms around the growing American canyon I was witnessing between the throngs--outnumbered though they eventually were--who idolized Sarah Palin and a stubbornly ignorant brand of politics, a kind of modern Know-Nothing Party, and the coolly rational (sometimes too much for its own good) younger army behind Barack Obama. Still, I didn't see the backlash coming--but when it came, I know it was a story that I had to witness in real time.

More than a year later, the story has been told. The Backlash has many fascinating details about those involved in it, not just the Tea Party but also Beck's 9-12 Movement, the nativists behind Arizona's Papers Please law and the Oath Keepers, an assortment of militia groups formed around the notion that President Obama is going to give orders that are unconstitutional. There is much to learn from this book, but one historical bit of information was especially revealing about how this backlash is different from the one President Kennedy experienced, The John Birch Society. A N.Y. Times review of The Backlash noted:

“Ironically,” [Bunch writes], “the main reason that the John Birch Society” — which went so far as to suggest that President Dwight D. Eisenhower was a Communist sympathizer — “failed to gain much traction in the early 1960s was because mainstream Republican politicians turned against them, even though the party was at low ebb in the Kennedy-Johnson years. Barry Goldwater, the leader of the so-called New Right movement who won the G.O.P. presidential nomination in 1964, did have considerable support from the Birchers, yet not only did he not embrace them but secretly authorized the intellectual leader of 1960s conservatism, William F. Buckley Jr., and his National Review to go after the organization, successfully marginalizing it and helping to keep its Richard Hofstadter-described paranoid style in the shadows, even as that decade grew more tumultuous.”

This backlash is indeed different, and we cover the distinction in this Facebook e-view.
The Glenn Beck Review: Let me ask you about this "perfect storm," this particular backlash. We've had them before. Clinton had the Arkansas Project. JFK had the John Birch Society. FDR had the Liberty League. What, if anything, makes this backlash that you've documented different from those in our past? 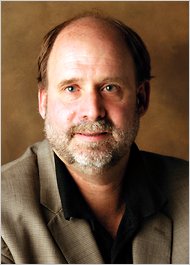 Will Bunch
Will Bunch: The big difference is the media -- and that happens on two levels. On the ground, the Internet and increasingly social media have been tools that have allowed conservatives to share, spread and validate their own misinformation at the speed of light, something that the Birchers never had. Beyond that, of course, is the existence of a conservative mass media that validates conspiracy theory rather than tamps it down, as happened famously when Glenn Beck allowed the ridiculous rumors about FEMA camps for law abiding citizens to hang out there for days and fester, or even Lou Dobbs on CNN seeming to embrace the birther theory. The validation within this right-wing media bubble has been a source of strength and unity for the Tea Party Movement.

the Tea Party's leading advocate
GBR: If seems that in The Backlash, Glenn Beck is a central character inspiring if not leading the reaction to Obama and his agenda. If not for Beck on Fox, do you think that the Tea Party would have had the success it has had to date in electoral politics? To ask another way, in the lengthy article about Beck in last weekend's NY Times, "Ailes told associates that if Beck were still at Headline News, there would have been 30 people" at his 8-28 rally. Do you think Beck would be having nearly the impact he's having or would be the central character in your book if he were just another reactionary, radio voice?

Will Bunch:  I think Glenn Beck is absolutely critical to the rise of the Tea Party -- that's true for several reasons. One is Beck himself -- he's a masterfully manipulative entertainer who's studied the art of radio and building an audience his entire life, and he's taken right-wing talk radio well beyond the tired RNC talking points format of Hannity and Limbaugh.
Meanwhile, his audience is angry and confused by the changes in America -- both economic (destruction of middle class) and cultural (an increasingly non-white nation) and receptive to Beck's emotion-laden appeals to their fear. And the common bond of being a Beck "diitohead" is a powerful unifying force. So, yes, I agree that a lot of the movement's success in turning out crowds like the 8-28 rally is a credit to Beck's influence, warped though it may be.


GBR: Specifically, Will, I asked about Beck on Fox. Was Ailes, in your view, right? Is Beck's show on Fox crucial, or could he have helped build the Tea Party movement nearly this effectively from his radio show?


Will Bunch: Oh, sorry for the confusion. Absolutely, Beck's move to Fox was critical -- he really didn't resonate much on CNNHN and even though he had a large radio audience he wasn't making the same cultural impact. Moving to Fox in January 2009 gave him direct access to a plugged-in audience that was most receptive to his message. Of course, the show started on Jan. 19, 2009, the day before Obama's inauguration (also MLK Day -- what a coincidence!) so that was also part of the perfect storm.


GBR: In The Backlash, you refer to "right-wing radicals," "constitutional conservatives," the "far right" and "ultra conservative" (w/r/t Broun). On p. 209 you refer to a "right-wing counterrevolution." No where that I found in The Backlash did you refer to anyone of your subjects as reactionaries. Why is that? Are Broun, Beck, Bachmann and the Tea Party/9-12ers not far enough from the center, or do you refrain from that descriptor for some reason? If that latter, why?


Will Bunch: "Reactionaries" is a perfectly good term, in hindsight I'm surprised I didn't use it. I hope it's clear from the book that these are dangerous people who want to drag America backwards -- that should transcend vocabulary, I think.

GRB: When you were doing your research, on location interviews with the backlash contributors, did you ever have concern for your personal security. Did you feel nervous in any way about being around the reactionaries?


Will Bunch:  No -- everyone I approached was willing to talk. Needless to say, I didn't wear my own political ideas on my sleeve; I just told people I was writing a book about the movement. Safety was never a concern -- perhaps if I'd walked up to a hardcore militia group unannounced, but that never happened.


GBR: After O'Donnell won the nomination in DE, Rachel Maddow interviewed V.P. Biden and asked about the results. Biden said it was "hard to explain" and talked about how only 28,000 Republicans actually voted for her. Could you shed a little brighter light on that primary result?

Will Bunch: Sure -- Christine O'Donnell is hardly the voice of a new Delaware, which remains a very center left state. Rather, she is the creation of a small cadre of right-wingers who voted in a low-turnout off-year primary, who were really voting their displeasure with Mike Castle over his potential to work with Barack Obama, the main target of their displeasure.

GBR:  Beck has turned this year from entertaining clown "fusing enlightenment and entertainment" to God's messenger. That drove at least one secular Libertarian away from him but seems to have garnered fevered passion from his flock. What do you think triggered this turn in his style and approach to his propaganda?

Will Bunch: It's hard to say what is driving Beck's recent "God" kick. Having watched him in action at the "American Revival" in Orlando and at the 8/28 rally, it feels like he's already bored with politics and he really wants to be a televangelist in the "Elmer Gantry" mode, an entertaining con man. In order to grow his audience and keep his current viewers engaged, he needs to be more outrageous, and that's a struggle. In recent days he's drifted back more to his apocalyptic mode, perhaps trying to recapture some of the magic of 2009. Ultimately, he's all about whatever will grow the business -- the politics is an afterthought.
Politics is an afterthought. One could certainly question that, but it is clear that there is some friction between Mr. Beck and the Fox "News" brand name. If Beck returns to Fox after his current medical leave of absence from the public spotlight, it will be interesting to see if he continues to push his growing media empire on his 5:00 p.m. platform. In a normal business environment, pushing an alternative source of product ("information" on TheBlaze.com in this case) would be a direct conflict of interest. On the Fox Republican/Tea Party Propaganda channel, Beck is clearly a useful - if problematic - tool in an election year.