The following is a press release from the progressive Media Matters for America, a watchdog of conservative media and figures.

Glenn Beck's guide to butchering a document and smearing a president

Glenn Beck and guests John Bolton and Stuart Varney mischaracterized a federal report to portray it as expressing "the worldview of the Obama administration." In fact, the document was issued during the Bush administration and is designed to "stimulate strategic thinking," not establish the administration's "worldview." Beck also falsely portrayed the report's discussion of trends in developing nations as applying to the United States.

Smearing the President again
Beck: "This is what the government says the world is going to look like in 2025." From the October 1 edition of Fox News' Glenn Beck:

BECK: There's a report out, called Global Trends: A Transformed World. I told you about it earlier this week. Here it is: Global Trends: A Transformed World. This is what it's going to look like: 2025 Global Landscape. This is, this is a government report. This is what the government says the world is going to look like in 2025. 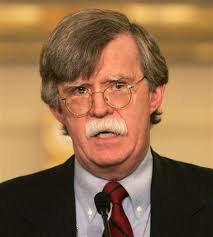 Major Mustache distorts facts
Bolton: Report assumes American "decisions have already been made" and are "congenial to Obama administration." From the October 1 edition of Glenn Beck:

BOLTON: And another absolutely critical point. The country in the world about which our intelligence agencies know the least is America. And I --
BECK: I think that's petty much on government on the whole. They don't know who Americans are.
BOLTON: I would go along with that. But my point is, this report is written as if America is a spectator, as if our decisions have already been made -- and by the way, all of them congenial to the Obama administration. That is the place we ought to start from, because that is the place we ought to reject.

Smearing the President with Bush Admin. report
Varney: "The worldview of the Obama administration, and of the president himself, is embedded in that report." From the October 1 edition of Glenn Beck:

VARNEY: The worldview of the Obama administration, and of the president himself, is embedded in that report. He's looking at the America that we have now, that he has partly helped to create with his policies of the last 18 months, and he's projecting that into the future, into the world. It's a future view which I personally reject and I think we will reverse. But there's no question, that report encapsulates Obama's view of the world now and in the future. It is, however, reversible.

Report issued two months before Obama took office. According the title page of Global Trends 2025 -- a report prepared by the National Intelligence Council that it describes as "the fourth unclassified report" in a series -- the document was released in November 2008. [Emphasis added]
Report prepared to "stimulate strategic thinking about the future" through analysis of "key trends." The report states that it was designed "to stimulate strategic thinking about the future by identifying key trends, the factors that drive them, where they seem to be headed, and how they might interact" and makes clear that "timely and well-informed intervention can decrease the likelihood and severity of negative developments and increase the likelihood of positive ones." From Global Trends 2025: A Transformed World:

We prepared Global Trends 2025: A Transformed World to stimulate strategic thinking about the future by identifying key trends, the factors that drive them, where they seem to be headed, and how they might interact. It uses scenarios to illustrate some of the many ways in which the drivers examined in the study (e.g., globalization, demography, the rise of new powers, the decay of international institutions, climate change, and the geopolitics of energy) may interact to generate challenges and opportunities for future decision makers. The study as a whole is more a description of the factors likely to shape events than a prediction of what will actually happen.
By examining a small number of variables that we judge probably will have a disproportionate influence on future events and possibilities, the study seeks to help readers to recognize signposts indicating where events are headed and to identify opportunities for policy intervention to change or lock in the trajectories of specific developments. Among the messages we hope to convey are: "If you like where events seem to be headed, you may want to take timely action to preserve their positive trajectory. If you do not like where they appear to be going, you will have to develop and implement policies to change their trajectory." For example, the report's examination of the transition out of dependence on fossil fuels illustrates how different trajectories will entail different consequences for specific countries. An even more important message is that leadership matters, no trends are immutable, and that timely and well-informed intervention can decrease the likelihood and severity of negative developments and increase the likelihood of positive ones.

Beck falsely portrays report's commentary on rise of "State-Owned Enterprises" in developing nations as applying to the West, U.S.

Beck: "[T]he model of China is the goal that these guys are saying everybody is pretty cool with." From the October 1 edition of Glenn Beck:

BECK: Another finding in this report: "Today, wealth is moving not just from West to East but it is concentrating under more state control. In the wake of the 2008 global financial crisis the state's role in the economy may be gaining more appeal throughout the world." Understand what that means. That means that the model of China is the goal that these guys are saying everybody is pretty cool with. This is what's gonna come. Well, I'm not cool with that. Are you?
Then there's this. "There will be a rollback of privatization and a resurgence of State-Owned Enterprises." "In the early 1990s, many economists predicted" that these enterprises, State-Owned, "would be a relic of the 20th century. They were wrong." State-owned enterprises "serve a secondary function as pressure valves, helping to relieve inflation and currency appreciation pressures. They also can act as vehicles for increased political control." Increased political control. Just what every American has dreamt about.

Today wealth is moving not just from West to East but is concentrating more under state control. In the wake of the 2008 global financial crisis, the state's role in the economy may be gaining more appeal throughout the world.
With some notable exceptions like India, the states that are beneficiaries of the massive shift of wealth -- China, Russia, and Gulf states -- are non-democratic and their economic policies blur distinctions between public and private. These states are not following the Western liberal model for self development but are using a different model -- "state capitalism." State capitalism is a loose term to describe a system of economic management that gives a prominent role to the state.
Others -- like South Korea, Taiwan, and Singapore -- also chose state capitalism as they initially developed their economies. However, the impact of Russia, and particularly China, following this path is potentially greater given their weight on the world stage. Ironically, the major enhancement of the state role in Western economies now under way as a result of the current financial crisis may reinforce the emerging countries' preference for greater state control and distrust of an unregulated marketplace. [emphasis added]

Almost immediately after the portion Beck cites, the report discusses "nearly opposite trends in the West." The report goes on to say that "a gap on the role of the state of the economy is likely to remain between the West and the rapidly emerging economic powers." From Global Trends 2025: A Transformed World:

The increasing role of the state as a player in emerging markets has contrasted until recently with nearly opposite trends in the West, where the state has struggled to keep pace with private financial engineering, such as derivatives and credit swaps. The seeds of this capital market's depth and complexity date to the 1980s but grew with rising asset prices and bull markets from the 1990s until recently. The financial engineering--based upon a magnitude of leverage unthinkable even a decade ago--in turn has injected an unprecedented degree of risk and volatility into global markets. Greater controls and international regulation--a possible outcome of the current financial crisis--could change this trajectory, although a gap on the role of the state in the economy is likely to remain between the West and the rapidly emerging economic powers.

Neither Bolton or Varney attribute the report to the Obama administration. They merely point out that the report is congenial to the administrations attitude. Not very damning to the scope of this story.

In addition, this report was the fourth edition in series of reports created by some non-US Government employees. Not exactly a Bush Administration document. More of an ongoing effort to describe the affairs of the world. Kind of like the CIA World Fact Book.

Not really much of a story here. And a poor attempt at spinning the story into much-ado-about-nothing...

Actually Bolton did. I'd have to go back and watch it again, but Bolton made it clear that this was the Obama Admin's view (report).

This report came from the Bush Administration. Much of what's in it is pretty clear and obvious. It's how the market works. China is rising as an economic power. That had Beck's and Bolton's and Varney's panties in a bunch, although at least Varney understood that some rules for the global economy were actually needed. Beck prefer's the rich man's, market anarchy, the same anarchy that just (2007-8) sent our economy down the tubes.