An open letter to Glenn Beck....

on why he hates academics so darn much

The following article is reprinted here with permission of the author, Ted Remington. His blog is called Pax Rhetorica: Thoughts on the confluence of peace, rhetoric, writing, politics, and everything else that tickles your fancy. It was originally published on September 6, 2010. 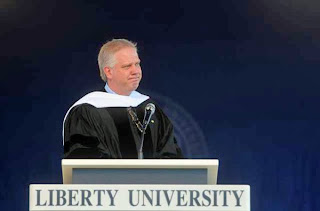 This is a not-so-peaceful entry, but one that I felt compelled to write after hearing Glenn Beck last week talk about the need for the American people to “steel” themselves against the evils of what he calls “reeducation camps:” colleges and universities, and the people who work there. According to Monsieur Beck, higher education is chockablock full of radical communists who want nothing more than to brainwash the youth of America into Mao-quoting automatons.

Funny—in all my time on college campuses, I’ve yet to see a course devoted to the study of communism. Not that such a course might not exist somewhere, but I’ve never seen it in any college catalog. On the other hand, every college or university I’ve been to has had an entire school or department of business and also economics, two whole academic fields devoted to advocating for the free market system. But I digress.

After hearing Beck, I felt like I needed to vent a bit. Maybe it’s because I’ve been around academics my whole life. Maybe it’s because I just got done putting together my application for tenure, a process that involved a lot of reflection on what it is that I do for a living and why I’ve chosen to do it. And maybe it’s because this weekend marked the 11th anniversary of my Dad’s passing, a man who embodied what being an intellectual could and should be.

Whatever the reason, I felt the need to respond in the form of an open letter to Mr. Beck, which takes the form of a Keith Olbermann-esque “Special Comment.”

Mr. Beck, allow me to assuage your hyperventilating fears about the plot to “reeducate” America’s youth in the “camps” of colleges and universities across the country.

I’m a college teacher. I am the son of two college teachers. I have been in and around academia my entire life. I have yet to meet a devout Maoist who saw his or her role in life as indoctrination of young people to overthrow the American way of life. The bogeymen you conjure up simply don’t exist, at least not to any measurable extent. I’ve known a handful of academics who might describe themselves as socialist, but I’ve encountered far more who are Libertarians. And, after all, we have an elected socialist in the Senate. If a few are teaching second year Spanish at universities scattered across the country, the Republic will survive.

And that’s the thing: even if that Spanish teacher *did* harbor a desire to indoctrinate her students, she wouldn’t have the time. Trust me, she’s far busier trying to get her charges to conjugate the verb jugar correctly more than 70% of the time.

The lit teacher is up late at night coming up with ways to get 18 year old kids to read and hopefully care about-- or at least appreciate—Beowulf. He’s not composing a lecture on how Grendel is actually an elaborate metaphor for the bourgeoisie. He just wants the kids to read the damn book in the first place, and perhaps, if he’s a wild-eyed optimist, to know what a metaphor is, period.

The composition teacher spends hours in her office writing feedback on student drafts encouraging them to make some meaningful assertion in their essays at all (and hopefully do it while avoiding comma splices). She couldn’t care less about what that assertion is. Trust me, she’d break out the party streamers and bring cookies to class if each of her students wrote a paper that took as its thesis that Glenn Beck is the Second Coming of Christ incarnate, as long as this thesis was expressed clearly and without dangling a participle.

What is it that you think goes on in the college classroom? Doubtless many of your audience have no firsthand experience themselves, but you should. You at least wanted to go to college.  Didn't last long, from what I hear, but you tried. You even mentioned that you’re sending your son to college as well. Would you actually do that if you believed your own palavering about “reeducation camps?”

Of course not. But that’s not the point, is it? No, the point, to the extent there is one in your yammerings, is to scare your audience, to make them think some fictional phalanx of Marx-quoting philosophy profs are coming for their children. Because a scared populace is one that can be more easily manipulated, one that is more prone to believing the jabbering of a morning zoo radio disc jockey cumpolitical messiah.

And that brings us to the final and most ironic point of all of this. In all your frothing at the mouth about communism, in all your 50-years-past-its-expiration-date red baiting, an ugly truth emerges: it is you, sir, who are acting like the communist. After all, the standard modus operandi of leaders like Mao and Stalin was to get rid of the intellectuals.

Indeed, from the execution of Socrates to the persecution of intellectuals in Iran and North Korea, reactionaries and demagogues have always seen the educated as a personal threat. This isn’t without reason. Educated people ask questions. Educated people don’t shut up and do what they’re told. Educated people know bullshit when they smell it.

Which is why you fear them, isn’t it, sir? You can’t fool them. They don’t buy your little shtick. They pay attention to the man behind the curtain who’s pulling the levers, putting on a sound and light show with no substance. If more people were intellectuals, if more people took a class on logic or listened to NPR or read a damn book, you’d be out of a job. Hell, you’d cease to exist. God forbid the American people be trained to think for themselves!

So, sir, why is it you think you find yourself in such esteemed company as Mao and Stalin and Hitler and Kim Jong Il—people who, like you, saw intellectuals as a threat to themselves and their political agendas?

The ancient Athenians, the people who invented democracy, knew that democracy depended upon an educated and free-thinking citizenry. Before their government devolved into reactionary fear-mongering after their defeat at the hands of the Spartans, back when they were inventing the very ideas of freedom and government by the people, they were also creating great philosophy and literary masterpieces and the beginnings of science. Education was prized and valued as a communal good—something that made the state stronger because it taught people to think and act for themselves.

And that’s why people like you, sir, people who are all too happy to have a plutocracy of the wealthy and the powerful rule over the state, and who do your best to camouflage your desires by dressing them up in the habiliments of democracy, that’s why you and your fellow travelers such as Mao and Kim curl your lips into a snarl when you mention intellectuals. We *are* the enemy. But we’re your enemy, not the people’s. We’re on their side. We’re on the side of those who ask questions of the powerful, those who challenge what we’re told we must believe, those who don’t accept simplistic answers to complex questions. We’re on the side of the truth seekers. And while you’re treading in the footsteps of dictators and despots, we’re walking with Socrates, with da Vinci, with Galileo, with Wollstonecraft, with Emerson and Thoreau, with Einstein and Havel.

In the end, perhaps your spittle-spewing paranoia about intellectuals, about anyone who makes a living thinking and teaching, is well-founded after all. Just not for the reasons you claim. Because the fear you feel is not on behalf of the people of America and their children; it is, as it was for Mao and Stalin, a fear based on your own self interest. It is a fear of people who can think for themselves rather than be told what to think and do and believe by know-nothing megalomaniac.

It is the fear, sir, that your “truth” will be trumped by the Truth.

All Non-spam Comments Approved
Free Speech is Practiced Here
———————————————————————–
Get Involved for 10 Minutes
Share this URL with your friends
http://sharethisurlaboutglennbeck.com
Thank you
Posted by The Glenn Beck Review at 4:05 PM