On his Fox show on September 2nd, Glenn Beck admits that he doesn't have any genuine knowledge about the President's faith, and the excuse he gave was "Nobody ever answers my questions." The following clip has that and Beck's biggest lie (or self-delusion) of the entire, post-rally week, "I'm a conservative."


Beck admits here that he does not "have any genuine knowledge at all" about the President's type of Christianity. His excuse, "Nobody ever answers my questions." It's been previously pointed out on this Review that Beck still doesn't understand Liberation Theology, much less where the President's Christian faith lies in the spectrum of Christian beliefs. For more on Beck's ignorance regarding Liberation Theology, see the original article, "Glenn Beck vs. Christ the Liberator" by Rev. James Martin.
Beck's admission of ignorance here is refreshing, but his excuse is lame for two reasons. First, Beck could do the research. So long as he still has the ability to read, which should fade as his eye disease - if he really does have macular degeneration - progresses. He could read to get more information about it. If he actually would research, carefully examine and study Liberation Theology, and then honestly examined the policies put forward by this President over the last 19 months, Beck would be hard pressed to show that Obama's efforts have been aimed specifically at poor people in America. The closest Beck could come to such a claim is the health care insurance reform bill passed by Congress and signed into law by the President which extended benefits to people who cannot afford health care insurance. The problem with this hypothetical claim is that the law was written by Congress. In fact, there is virtually no evidence that President Obama is targeting policies or executive orders toward the poor exclusively so far. From the progressive perspective of David Micheal Green, author of The Regressive Antidote, Obama has been the "do nothing" President. If Obama is a practitioner of Liberation Theology, it's not evident to date.

conservative?
The second point about Beck's excuse for his ignorance concerns his whine, "Nobody ever answers my questions." The White House has more important matters to address than the rantings, dishonest questions, false claims and baseless accusations of a self-desribed rodeo clown and uneducated reactionary. It would not matter if someone in the Administration called Beck's red phone because the people who watch Beck's show on Fox (aside, perhaps, from the critics) are never going to believe or support this President or vote for a Democrat anyway. Beck's excuse is also dishonest. The Glenn Beck Review has addressed some of Beck's questions, so "nobody" is an exaggeration at best and ignorant (or deceitful) in fact.
Beck's guest on the episode, when he first addressed Liberation Theology, was Anthony Bradley who referred to the Review as quality control for Mr. Beck. That was not an unfair assessment, but Beck doesn't care about getting feedback to improve his arguments; Beck thrives on deceiving his audience with hyperbole,  exaggeration and absurd and controversial claims. Beck's knee jerk response to criticism is to attack the critic, in this episode and others, right at the top of the show. Misleading people has become a key to Beck's success, and he's gifted enough to have his followers declare themselves to be "waking up." Glenn Beck could not even refrain from making false claims during his Restoring Honor speech. He put himself on the national stage and could not resist the temptation of telling lies, three of them at least. Those deceptions mark Beck's most flagrant example of hypocrisy to date. Honor, Mr. Beck; honor?
Finally, Glenn Beck, a Mormon, has gall to suggest that Obama's faith is outside of the Christian mainstream. Protestantism and Catholicism are two broad forms of mainstream Christianity in America. Some evangelicals consider Mormonism a cult. Mormons can argue that their faith is mainstream in America, but the fact that they have to make their case at all is indicative that Beck's faith is not mainstream to many Christians.

Beck's biographer, Alex Zaitchik, has recently described this in an interview with Democracy Now's Juan Gonzalez:


ALEXANDER ZAITCHIK: ...I think, the most interesting fault line that’s developed lately. It’s not so much between Beck and his liberal critics—we all know about that—but it’s between his evangelical fan base, those who are a little bit put off by his posturing as a Christian leader, as a divine medium, when in fact he belongs to what most evangelicals...consider a cult. So it’s a little strange also that he would be throwing stones at other people’s Christianity, when he himself is in a pretty big glass house when it comes to, at least as his fans understand, his faith.

Since the person in the Senate, who shepherded the comprehensive health care insurance reform bill, Harry Reid, is a Mormon, on the current national stage, re-distributive health care costs appear to be more of a Mormon plot than any success of Liberation Theology from the White House. Supporters and opponents of Beck need to understand that there is at least some Mormon opposition to Glenn Beck.
Glenn Beck is no conservative thumbs are pointed in wrong direction


Beck's claim in this episode that he is a conservative belies his own anti-conservative political philosophy. In fact, Beck himself belied this claim when he said in the same segment of the same episode that he is a Libertarian. Beck has argued that the United States should reverse 100 years of progressive legislation. Conservatives, by definition, want to maintain the STATUS QUO, not change it. Beck's extremist Libertarianism is NOT conservative; it is reactionary. Many pundits refer to reactionaries as "radical," but that's inaccurate. Radicals are progressive; reactionaries are regressive. Bin Laden is a reactionary. Racists are reactionary. Glenn Beck is reactionary too, just not as reactionary as members of the KKK. Beck is not a bed-fellow of the KKK; he is in the next bed over. See the diagram below for a depiction of this understanding. 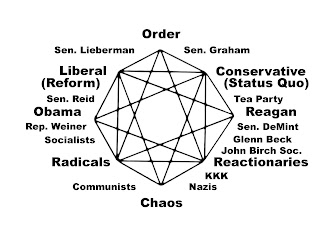 Taxonomy of political values
This taxonomy of political values was drawn before the Tea Party candidates won primaries and are now in the spotlight. They, like Glenn Beck, are also reactionary. Beck, the Tea Party, Libertarians, the Koch brothers and the John Birch Society are bedfellows who belong on this mandala right about where the word "Reactionaries" is positioned. Republican President Eisenhower referred to ideas like Beck's as "stupid." Conservative David Klinghoffer refers to people like Beck as a "crazy-cons." Peter Wehner of Commentary Magazine has argued that Beck "is harmful to the conservative movement." Conservative commentator Mark Levin has remarked, “I have no idea what philosophy Glenn Beck is promoting. And neither does he. It’s incoherent. One day it’s populist, the next it’s libertarian bordering on anarchy, next it’s conservative but not really.”(1)


Perhaps Will Bunch, author of  The Backlash (shown above), has Beck's political philosophy pinned down most accurately when he writes, "What will sound the most entertaining coming out of my mouth at this particular moment?"(2) Glenn Beck's claim of being "conservative" is disingenuous at best, but it is a statement that conveys ignorance of the political philosophy in general and the specific one that he will lay claim to if he ever makes up his mind. Of course, his loyal minions will dispute this assertion because they incorrectly believe themselves to be "conservative," even if there is little about the status quo that they can support or want to maintain. One central theme with the reactionaries, including many people self-described as "conservative," is anti-"big-government," too much government involvement in "our" lives. Because there is understood to be a commonality of rights between the individual and the giant corporations in America, the "our" in Tea Party political slogans includes the machines of business that, in fact, are not individuals. That's true with the Republican and Democratic parties as well although the latter has exceptions to that rule. Democrats are the party more willing to use government to protect the public interest against corporate abuse, neglect, dangerous cost-cutting, unsafe labor practices, etc., in short threatening the public's lives. In a word that is a current event, eggs.


Glenn Beck doesn't care about the public interest and probably wouldn't acknowledge there to be such a thing because it's not written in the Constitution in so many words. A debate like this with Mr. Beck would be an interesting political discussion if Beck would step off the big stage long enough to study as much political philosophy in college as he has religion (one semester). This is urgent now while he can still focus on words, if it's not too late already. The problem is Beck doesn't care about actual facts. It's the narrative - off somewhere on the far right of "individual" (corporate) freedom, low taxes, small government, flat tax, and otherwise, early-to-mid-1800s threats from all business directions - that matters to him and his supporters. To use language Glenn Beck can easily understand, the struggle he is waging against the left (progressivism and the President's liberalism) is his pushing of Overton's window up toward individual (corporate) freedom.


A flaw in the Overton's window theory addresses that language and understanding, but Beck is still making false claims that need to be addressed before serious, political discussion about his "political philosophy" is possible. It's impossible to seriously engage a rodeo clown turned "messenger of God" when he has no idea where he is coming from politically and continues to make claims that have no basis in reality. It's challenging to take Beck's claim to be morally righteous while he continues to exhibit glaring hypocrisy unless one wants to believe the nonsense that comes out of his mouth and thus select to not hear or understand when he lies. Millions of people are very good at this.

2) Will Bunch, The Backlash: Right-wing Radicals, High-def Hucksters, and Paranoid Politics in the Age of Obama, Harper Collins, 2010, p. 59

I'm really certain the RED PHONE is hooked up to anything other than a tin can or a Fisher-Price kiddy phone. Pure Prop.

No, one of his supporters called it once because the number was on the bottom of the phone and high-def allowed him read it and to call during a commercial break to warn Beck that it was in view.

Supposedly Beck has changed the number.

That clears that up. Thanks for the info.

Evidently the Mormons no longer teach about the Ten Commandments. Beck is absolutely guilty of violating the Ninth: "You shall not bear false witness against your neighbor."

I think there are some good things about the teachings that Glenn Beck has in many areas. Where I find a problem is his views on faith. Our faith as Christians is only as good as the object upon which it is placed. I am starting a blog showing the differences of Mormon theology of Glenn Beck and that of Christianity. You can check out this blog at http://glennbeckfaith.info

Thanks for the info Twilight Saga, but I think that there are very few "good" things about a teacher who deceives his viewers rather consistently. Not all the time, but too often to trust ANYTHING that Beck claims.