Who is Glenn Beck promoting Now?

Glenn Beck promoted The Red Network
Over the weekend, The Glenn Beck Review ran Alexander Zaitchik‘s exposé of Cleon Skousen, author of The 5,000 Year Leap, a book that Beck promotes a lot.  It was noted in that exposé that Skousen was a racist.
Media Matters for America is an organization “put in place, for the first time, the means to systematically monitor a cross-section of print, broadcast, cable, radio, and Internet media outlets for conservative misinformation — news or commentary that is not accurate, reliable, or credible and that forwards the conservative agenda — every day, in real-time.” No wonder Beck disparages that organization. The link to their coverage of Beck is listed below and on the blogroll.


Beck: This is a book, The Red Network. This came in from 1936. People — McCarthy was absolutely right. Now he may not — he may have used bad tactics or whatever, but he was absolutely right. This is a book — and I’m a getting a ton of these — from people who were doing what we’re doing now. We now are documenting who all of these people are. Well, there were Americans in the first 50 years of this nation that took this seriously, and they documented it. And this is from 1936, and in it, it talks about — it’s the who’s who and handbook for radicalism for patriots. This is “Who are the communists in America?” The overwhelming number of communists — labor unions. The other thing that they talked about was, in this book that I was reading last night, they said, you know, there’s this teachers union thing, but you really want to know who the real radical communists are? The NEA. That’s 1936. And they’re talking about this new organization that is really nasty, that you really have to look out for. The NEA. But everything this book has talked about they have mainstreamed.

The Red Network is rife with racism, anti-Semitism, and religious bigotry.
Media Matters noted ” ‘Un-Christianized’ ‘colored people’ are ‘savages’ who owe success to Christian whites. As part of a chapter alleging communist and socialist infiltration of religious institutions,[Elizabeth] Dilling wrote:”


Dilling: The colored people are a sincerely religious race. As long as they stayed in Africa un-Christianized, they remained, as did pagan white men, savages. Their pagan brothers in Africa today are savages, while in a comparatively few years, under the opportunities of the American government and the inspiration of Christianity, the American Negroes have acquired professions, property, banks, homes, and produced a rising class of refined, home loving people. This is far more remarkable than that many Negroes are still backward. The Reds play upon the Negroes’ love of their own people and represent them as persecuted in order to inflame them against the very white people who have in reality given the colored race far greater opportunities than their fellow negroes would give them in Africa today. [Pages 35-36] 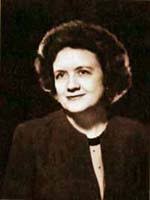 
And later in the book Dilling wrote more:


Negroes are urged to fight their white “oppressors,” who actually have freed them and given them better jobs and opportunities than exist in Africa. [Page 55]


That’s one way of thinking about slavery. Dilling asserted that ““God created separate races, but Communism insists upon racial inter-mixture.” She added:


The time was, when Methodism in its zeal for personal purity frowned upon dancing. Some Methodists nowadays who are little opposed to dancing even in a church were a bit surprised, however, when several colored men were introduced into circle dances at a dance given in the parish house of Tittle’s church and were thus forced upon the young white girls as partners. An M. E. Guild member whose daughter attended this dance reported that when she phoned the assistant pastor about this he said that these colored men had been invited by Dr. Tittle himself (one of them being the son of a classmate of his at college), who felt that it was now time that the young people learned to mingle with other races. (God created separate races, but Communism insists upon racial inter-mixture and inter-marriage.) [Emphasis added.]


Glenn Beck sure knows how to pick them! Remember, Beck is not a racist. At least The Review has not been able to document that yet.


Media Matters pointed out that “Dilling would later become a full-throated supporter of Nazism who reportedly attended Nazi party meetings in Germany and pro-Nazi rallies in the United States…” and that Dilling attributed the anti-Semitic nature of German fascism in part to “the large number of revolutionary Russian Jews in Germany”:


Dilling: Fascism, the bitterest enemy of Socialism-Communism, resembles Socialism in the respect that it gives great power to the State and dictatorship over all industry, employment, education, freedom of the press, etc. The points of difference which make it violently hated by the Reds are: its opposition to the “class struggle” and the subjugation of the bourgeoisie by the dictatorship of the proletariat. Rather, it seeks a harmony between all classes and concedes to industrialists, white-collar, professional, as well as laboring workers, a place in the social order as necessary parts, not “class enemies,” of the whole, but under State control. It defends some property rights and religion. It opposes Marxist philosophy and the Communist and Socialist Marxian parties. Fascism in Italy is not anti-Semitic. The problem of the large number of revolutionary Russian Jews in Germany doubtless contributed toward making Fascist Germany anti-Semitic. [Page 99]


Historian Professor Jeansonne, in an interview with Media Matters, criticized Beck’s “ludicrous” promotion of Dilling’s The Red Network, saying that she was considered a “crackpot” in her own day who “appealed to the lunatic fringe.” Jeansonne characterized Elizabeth Dilling as probably the “most bigoted woman anti-Semite of the period around World War II,” and said she “did the cause of anti-Communism a disservice.”

Glen Jeansonne
Jeansonne is author of the book, Women of For Right: The Mothers‘Movement and World War II.

Professor Jeansonne was interviewed by The Glenn Beck Review.
Review: Was Dilling a member of the Nazi Party?
Jeansonne: No. Dilling was probably a Nazi sympathizer. She traveled to Germany and met with Nazi party [elites]. She didn’t oppose war in general; she thought that in WWII, we were fighting on the wrong side, that we should be fighting with Hitler against the Russians. She was the foremost,  American, woman anti-Semite.
Review: Why do you find it alarming that Beck would promote The Red Menace?
Jeansonne: Using Dilling as an authority for anti-Communism is flimsy. Dilling was not a reliable source. Dilling was obsessed with Communism. Beck is superficial in certain respects. Beck is center-right, not in the same class as Dilling. Dilling was mentally unstable. Her life was chaotic and tumultuous. If Beck knew what I knew, he probably wouldn’t use her as a source. It indicates that he didn’t check out the reliability and reputation of The Red Menace author. This destroys some of his credibility. [Emphasis added.]
So, Beck is promoting a book by a crackpot who appealed to the lunatic fringe. Hmmm, where have we heard that before? Oh, right, Cleon Skousen was a crackpot who appeals to the lunatic fringe although his supporters, all those people around the blogosphere promoting Skousen’s lists, don’t think of themselves as “fringe.”
Maybe Beck’s supporters can rationalize this development in his “thinking.”
Why does Beck promote the writings of racists and anti-Semites?