Why Beck does not have to walk back from his positions

Rand Paul, Tea Party favorite, winner of the Republican primary in Kentucky last week for the U.S. Senate and son of Congressman Ron Paul, found himself walking back from his pro-segregation view against Title II of the Civil Rights Act of 1964. Title II  reads:
TITLE II–INJUNCTIVE RELIEF AGAINST DISCRIMINATION IN PLACES OF PUBLIC ACCOMMODATION
SEC. 201. (a) All persons shall be entitled to the full and equal enjoyment of the goods, services, facilities, and privileges, advantages, and accommodations of any place of public accommodation, as defined in this section, without discrimination or segregation on the ground of race, color, religion, or national origin.
This law, this Title II, ended the freedom of private businesses that served the public to discriminate against people. It rendered illegal “Whites Only” signs on all private businesses in the United States.
Up until the moment that he was confronted about his Libertarian perspective by Rachel Maddow after his victory, Dr. Paul believed the following [from a letter he wrote to the Bowling Green Daily News in 2002]:
“A free society will abide unofficial, private discrimination … even when that means allowing hate-filled groups to exclude people based on the color of their skin. It is unenlightened and ill-informed to promote discrimination against individuals based on the color of their skin. It is likewise unwise to forget the distinction between public (taxpayer-financed) and private entities.”
Up until the day after that interview with Ms. Maddow, when he refused to back away from that opinion, Dr. Paul was a Libertarian purist.  Now, he’s a candidate; he claims that he’s not going to repeal the Civil Rights Act of 1964 – if elected.
To better grasp how far out of the mainstream a libertarian philosophy is in the United States, it’s instructive to revisit the following: 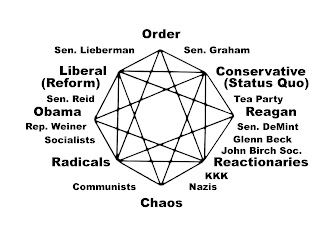 Taxonomy of  Political Values
Notice that Libertarian is not indicated on this mandala. That is because there is room for only one word where Libertarianism is located in this classification, and that word – indicated above – is Reactionaries. Libertarians want to return the United States to a time – before the 20th Century – when the federal government almost never interfered with the excesses of private enterprise, rarely legislating to protect the the public interests against the private, profit-driven interests of large and small businesses. That regressive political philosophy makes them reactionaries.
Even Senator DeMint would not support Dr. Paul the next day in his pro-freedom-to-discriminate stand against Title II. For that matter virtually no other elected Republican, aside from Ron Paul, another Libertarian, would come out in support of Dr. Paul’s extremist views.
Later that same day, Dr. Paul walked back from that opposition to Title II of the Civil Rights Act of 1964. He had to because he realized he had a snowball’s chance in hell of winning the general election in November if he did not!
Why Glenn Beck does not have to walk back from his positions.

Glenn Beck is frequently railing against progressivism, which he calls a “cancer” in America. Beck is, we are to believe from this, against:
There are many other progressive laws that Glenn Beck opposes but rarely specifically cites.  Beck doesn’t have to back away from any of his regressive viewpoints because he’s not confronted in debate opposition. He does not even allow people to post comments on his blog!
Glenn Beck is “hiding” behind walls that isolate him from real debate and discourse. He never holds a press conference, never debates qualified progressives in a neutral setting, rarely if ever hears serious challenges to his regressive thinking.  He admits to not listening to Countdown with Keith Olbermann. 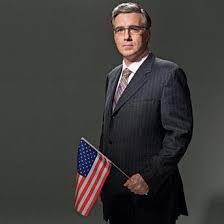 Beck’s  Wall of Isolation
It’s not likely that Glenn Beck will ever come out behind his protective walls of ideological isolation, just as it was unlikely in the 1960′s and 1970′s that the former Soviet Union would allow the Berlin Wall that separated East and West Berlin to come down. Not, at least, until Beck is compelled by the very people in his audience who realize that on the Glenn Beck Show, nothing is as it seems to be.
Beckerheads, his unquestioning supporters, who are emotionally attached to Mr. Beck, will not see that wall of isolation.  ”But he’s on TV. He gives speeches.”  The rest of America –  those of us who believe in the give and take of ideas, who believe that given a fair and balanced debate, most Americans will choose honesty over deception and integrity over hypocrisy – must make it clear that we want the isolation ended.
Mr. Beck, tear down that wall!
Beck is in some ways a paradox. For example Beck is courageous, and Beck is a coward. Beck doesn’t want the government telling him that he has to exchange hot links with sites such as The Glenn Beck Review or Crooks and Liars that disagree with him, but he sure as hell is not going to volunteer to do so either. For more examples of Beck's many paradoxes, see "Becoming Paul Revere."
Anyone with ideas on how to lure Mr. Beck out into the open, how to get Glenn Beck to accept the challenge to debate, to exchange hot links to sites like this or even just to accept comments on his blog can leave comments to that effect below.
One question that begs to be asked is why anyone, who supports civil rights, is ever a guest on his show.
All Comments Approved Here:
Free Speech is Practiced


Anyone, who does not notice Beck’s lies or his hypocrisy, is encouraged to read the previous post, A Must See 3-in-1 Video Clip: Classic Beck!
As always, please share this URL. Beck frequently encourages his viewers to have their neighbors, friends and relatives tune into his show. Share this URL is the mirror image of that strategy.  It’s going to take a movement, a wave of opposition and protest to make Beck an honest man. All together now, from MAN OF LA MANCHA (1972):
To dream the impossible dream
To fight the unbeatable foe
To bear with unbearable sorrow
To run where the brave dare not go…
This is my quest
To follow that star
No matter how hopeless
No matter how far
To fight for the right
Without question or pause
To be willing to march into Hell
For a heavenly cause