But will the Beckerheads even care?
Several loyal supporters of Glenn Beck have posted comments asking why The Review has not looked into the allegations Beck makes on his show. Like good tools, they repeat Beck’s accusation that bloggers just call names and don’t actually look into the conspiracies Beck is pointing out.
Although it has taken weeks to get around to it, the research did not take long to examine Beck’s claim that Maurice Strong, one of Canada’s leading environmentalists, was out to destroy the world economy. Specifically on 5/13:
Beck: Well, this — granted, Maurice Strong will say this is for a novel that he was writing but he has never written a novel, and Maurice Strong is a guy who is U.N.-central and surprisingly involved in almost everything. This is what he said in 1990 in an interview.
Strong: What if a small group of these world leaders were to conclude that the principal risk to the Earth comes from the actions of rich countries in order to save the planet, this group decided, `Isn’t the only hope for the planet that the industrialized civilizations collapse? Isn’t it our responsibility to bring that about?
Beck: So, this is a what-if. And remember, what we’re talking about is a novel that has never been written all these many years later. And he’s never written one, but it’s a good novel. But words have power. We’re looking for a small group of people. They’ve got to be global. A small global group of people. They have to believe — the small group of people — that there is a threat to the Earth, a principal threat to the Earth, which is that rich countries are the problem. A risk to the Earth, and that risk is rich countries. Then they also have to believe that this group, they see this risk and it’s coming from the rich countries. And the best thing they can do, the only hope is for the planet to collapse the industrialized civilization.”
Maurice Strong’s Response 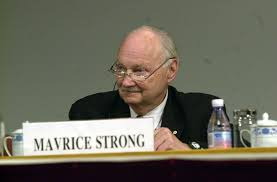 The picture above is a hot link to the entire “Response to erroneous, ideological attacks,” and the following is an extract addressing this bit of Beck’s yellow propaganda, errr “investigative reporting.”
Strong: A particularly dishonest statement by long-time critic, Peter Foster, to his own editor, citing a fictional account which was clearly stated to be an extreme scenario of what might happen by the year 2030 if we failed to act. This specifically stated that it was not a prediction, and certainly not a recommendation, but the kind of prospect we must seek to avoid.
No doubt Beck’s loyal supporters, so-called Beckerheads, will charge that Strong is lying, just covering his tracks. Who can say with certainty; but a comparison of accomplishments between Beck and Strong might shed light on the veracity of Beck’s claim and Strong’s explanation.
Honors and Awards Earned by Maurice Strong:
Strong has also received 53 honorary doctorate degrees and honorary Visiting Professorships at 7 universities.
Honors and Awards Attained by Glenn Beck

Granted, Strong is older than Beck.  But if you had to choose between the two of them, who was most likely conveying an honest report of that interview?
A line from Frank Zappa is relevent here. “People will agree with you only if they already agree with you.” This is key as to why the Beckerheads will ignore the documented deceit and hypocrisy of Glenn Beck on The Glenn Beck Review, but it cannot hurt to keep  making the points. Beck lies a lot and demonstrates hypocrisy often. Doubters of those assertions must keep reading previous posts  and get more facts about Beck.

Post a Comment
All Comments Approved
Free Speech is Practiced Here
———————————————————————–
Get Involved for 10 Minutes
Share this URL
http://sharethisurlaboutglennbeck.com
Thank you
Posted by The Glenn Beck Review at 8:44 AM