Beck's newsletter of 7/2/10, read in part: "And don't miss your chance to pay tribute to our troops this August 28th at the Restoring Honor Rally in Washington D.C. with Glenn. Get all the details on how you can attend HERE." Click his image below, and you'll see the full video of Beck near the Washington Monument.

Looking around for Jefferson and other framers..
Nothing in the promotional video mentions our troops, but he is searching for three of the framers of the Constitution (he's not crazy here; he is being inarticulate) and adds more of the usual hype over his Restoring Honor rally on 8/28/10. Beck wants to reclaim the civil rights movement to its rightful place: in the hands of rich people like him. Apparently, since the middle class tax rates are currently the lowest that they have been in forty years, the Tea Party must want the government to keep their hands off Beck's money.
There will be an actual civil rights event in Washington that day, the Reclaim the Dream march held three miles away. There are no $100 posters available, just grass roots organizing. As stated on blackvoicenews.com:


"Dr. Martin Luther King Jr. convened hundreds of thousands in Washington and delivered his infamous ‘I Have a Dream’ speech. Today, on the 47th anniversary of this momentous occasion, we must RECLAIM THE DREAM – for it is still far from being truly fulfilled.

On August 28th (the precise anniversary of MLK’s speech), the National Action Network’s 47 chapters will join with other civil rights leaders, clergy and progressive activists as we lead a massive rally and march in Washington, D.C. As a student of MLK’s teachings, I can think of no other appropriate way to simultaneously pay homage to our great civil rights leader and also highlight our ongoing struggle than to once again gather at the nation’s capital.
We will assemble at Dunbar High School at 11 AM sharp and march from there for the sake of our community, for the future of our children and for the betterment of the entire nation."

On Countdown with Keith Olberman on July 1st, Al Sharpton addressed the political values of the Beckerheads and Tea Party:


[Beck]’s right, blacks don’t own Dr. King– they never did. And if he looks at the video, it was just not blacks marching in ‘63. It will not be just blacks that will be rallying with us today… we knew all along that it is about bringing the country together. They are the ones that say no to government, let’s go back to states’ rights, let the unemployed go uninsured, let us pit people against immigrants. We are the ones saying let’s bring the country together under some sound judgment. Come and affirm that at a rally of affirmation, not some joke that’s saying they are reclaiming a moment that I don’t think they understand, and I’m being kind.” [Emphasis added].”

Sharpton pointed out that Martin Luther King's speech was the "antithesis" of what the Tea Party and 9-12ers are about. From "I have a dream:" 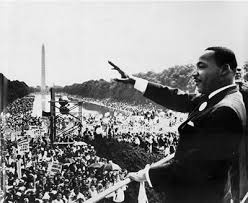 It is obvious today that America has defaulted on this promissory note insofar as her citizens of color are concerned. Instead of honoring this sacred obligation, America has given the Negro people a bad check, a check that has come back marked "insufficient funds.

But we refuse to believe that the bank of justice is bankrupt.  We refuse to believe that there are insufficient funds in the great vaults of opportunity of this nation.  So we have come to cash this check, a check that will give us upon demand the riches of freedom and security of justice.
We have also come to this hallowed spot to remind America of the fierce urgency of Now.  This is not time to engage in the luxury of cooling off or to take the tranquilizing drug of gradualism.
Now is the time to make real the promise of democracy.
Now is the time to rise from the dark and desolate valley of segregation to the sunlit path of racial justice.
Now is the time to lift our nation from the quick sands of racial injustice to the solid rock of brotherhood.
Now is the time to make justice a reality to all of God's children.  The evidence in our investigation showed that Schlozman, first as a Deputy....

The justice that King is referring to is the "social justice" that Beck frequently bemoans as a Marxist plot. When Beck realized that his rally coincided with the date and place of King's famous speech, he could have shown a little respect and picked a different date or venue. However, Beck's style is to create controversy as a mechanism for getting noticed. As usual, it's working.

Posted by The Glenn Beck Review at 5:34 AM

Funny, I didn't see Dr. King asking for "social justice' there just for "racial justice". You talk about Beck kowtowing to public opinion when you do the same. Sharpton and J. Jackson is pure race baiter who Dr. King is certainly disappointed in.

I can’t say one way or the other weather or not Beck had the anniversary date in mind for this. Based on your characterization of Beck, you would have to admit it was not a mistake.

Just a simple question, what is your problem with “Restoring Honor” other than it relates to Beck? Isn’t honor a good and virtuous thing? Restoring it, is that progress or reactionary? Who needs honor these days huh?

I’m on the west coast and can’t make the rally. If I were on the east coast and within a couple hours drive, I would be there. I believe the lack of honor particularly from our politicians and talking heads is a major malfunction in this country. While you may strive to be one of those future talking heads TGBR, you fall far short due to you inability to form you own legitimate opinion.

Funny, you just didn't look long enough. You suffer from selective perception. When King talked about the "riches of freedom and the security of justice" he was talking about a redistribution of power, economic power, of social justice. It's probably why Beck has backed away from MLK's message as of late.

If Beck were active during King's time, he would have been against King, not marching with him. That is my opinion. Beck is a reactionary; King was a reformer moving in the direction of radical at the time of his assassination.

I've written on here that the honor Beck needs to first establish is his own. He didn't have much as a zoo oriented DJ, and he still does not have much.

I have lots of opinions, but I try to keep them out of this blog for the most past. There are here, I'm guessing that you couldn't spend the time to find them. That's not my problem.

Funny, you just didn't look long enough. You suffer from selective perception. When King talked about the "riches of freedom and the security of justice" he was NOT talking about a redistribution of power, economic power, of social justice. He was talking about equal opportunity for life, liberty, and the pursuit of happiness (the riches of freedom) based on content of character, not skin color.

I hate to sound like a dummy, but what do each of the selections in your "Select profile" mean? Do I need a Google Account for this? Don't know what the others are (WordPress, AIM, Open ID). I'll select anonymous for now and hope this question goes through.

Anonymous, it means you can use your Google/Wordpress/AIM account if you have one. If you don't, you can type in your name as some people actually do.

Anonymous, perhaps you don't know the meaning of "promissory note." There will be plenty of speeches about this topic this weekend, not at Beck's "non-political" rally but at the REAL civil rights march. I don't think many speakers there will take your side.

King certainly was discussing redistribution of power; he just never had much of a chance to spell out exactly what mechanisms to bring to bear on this redistribution. If he was only talking about "equal opportunity," it's worth noting that Beck is against the affirmative action that makes that possible. Beck is against King's dream and would have fought King tooth and nail if Beck were on the radio in 1966 when King was agitating for civil rights.

First, thanks on clearing up the "select profile" button. I'd rather use a pseudonym than my real name so as to not get a brick through my front window. I never get obscene or nasty but I do have strong opinions on some subjects. I don't mind if you, as the administrator of this site has my real name (provided there are assurances you would keep it private), but I'd prefer it not be in the public domain at this time. Therefore, the only choice available is "anonymous".

I do understand the meaning of "promissory note". I believe, in this context, it refers to the promise of freedom and an equal place at the table for those of color who fought for the Colonial cause during the Rev-war and the same promise made again to the freed slaves following the Civil War. Racial discrimination had prevented payment in full of the promissory note. MLK's dream was to end the discriminatory attitude (I'm assuming on the part of all races) in order for all to obtain a seat at the table with final seating arrangements based on content of character, not skin color. If that goal (mechanism) could be achieved, then redistribution of power and wealth would occur naturally and automatically to all regardless of race.

I don't see affirmative action, in this context, as "equal opportunity" because it is a favoritism based on race program. It doesn't get rid of racial discrimination, it merely shifts it from one race to another. Whites practiced "affirmative action" in their favor, which is what created this mess in the first place. "Affirmative action" is the same as if the passengers and crew of the Titanic somehow concluded that cutting holes in the other side of the ship would let the water out.

I use my real name and no one has thrown a brick at our house...yet. I'm not worried.

Equal opportunity is possible without affirmative action at least in the areas of education. That's what levels the playing field for those who have been systematically subjected to racism. That said, there are poor whites who also need better educations and better opportunities.

You're right, you have strong opinions. Probably stronger than an open-minded, wishy washy liberal has. What created this mess in the first place isn't white affirmative action; it was white racial arrogance and slavery. We've come a long ways in the last 100 years, and that is in large part due to the efforts of progressives that Beck hates.

I don't need to know your name; I think you'd show courage by commenting under your name. It's a name, not a name and address.

I concur with what you are saying above in most respects. I used 'Whites practiced "affirmative action" in their favor" in a literal as well as a metaphorical sense meaning racial arrogance as you point out, which leads to taking artificial advantage over other races. My choice of words may have been a bit vague in that respect, though, as I was trying to illustrate the point for this topic. Using the legal system to discriminate by race (or gender or ethnicity) is a bad road to go down, whether it be Jim Crow or affirmative action.

Woodrow Wilson (a relative of mine a few generations back) was a progressive and a racist. Yeah, Beck hates him big time!

Interesting blog you have here. It'll take some time for me to get through all the material. Whether I agree with it or not, it's still a good read.