Glenn Beck was clearly out of sorts after apology

A lie, an assumption and an astonishing juxtaposition on June 1st
On his show of June 1st, Glenn Beck addressed his apology for bringing up the President’s kids on his radio show Friday, May 28th.Beck said that “there is absolutely no excuse or reason to ever, ever, ever, ever even come close to the line of dragging somebody’s family into the debate. I’ve never done it. I’ve never done it until last Friday.“

Telling the truth about this?
This is not true by any stretch of the facts. The Review had posted his hypocrisy about this on the morning of the 28th from Beck’s bringing up the President’s daughter the day before! See Is Beck’s Hypocrisy Peaking This May? Maybe Glenn Beck needs to read The Glenn Beck Review before going on the air.
But that’s just the beginning
As pointed out by Media Matters, Beck attacked the President’s aunt on April 2nd, 2009. He brought up Obama’s parents on March 17th and again on April 6th.  On that same show, Beck pointed to pictures of Obama’s family and said: “This kid didn’t have a chance to be rooted in the Founding Fathers.” On April 9th, Beck brought up the President’s parents on his radio show. He talked about the Obama kids on May 24th on his radio show.
Even when Beck is apologizing about his hypocrisy, he lies! Previously, The Review has shown that Beck is hypocritical even about honesty. Click on A must See 3-in-1 video clip: classic Beck! for details.
Beck told his audience during this show, “We have to raise the bar higher…everything’s about to change.” The Review can only hope that means Beck is going to stop lying! No breathing will halt here, waiting for that to happen. To quote from Crooks and Liars: “There’s a reason Beck’s ratings are in rapid decline: People have had enough of this ugliness.” Well, some people. Themadjewess is still clinging to her falling hero. (See her comments on the Joel Rogers’ Answer Exposes Beck’s Crime Inc. post.)
Assumptions make what out of whom?

On the same show – this post is only about his June 1st show on Fox – Beck said the following:
Beck: If you’re Barack Obama, you’re watching me…you can’t tell me that he doesn’t look [at Beck] and just snap.
Two points here: Beck assumes that the President of the United States has nothing more important to do weekdays at 5:00 than to watch some deceitful, yellow propagandist rant on about him, Progressivism and whatever else seems to catch Beck’s notice. Beck assumes that Obama would “just snap” listening to a rodeo clown (Beck’s self-description).
The second point is psychological. If The Review claimed that the President is reading this blog, it would paint this blogger as unhinged, specifically as suffering from megalomania:
1. A psychopathological condition characterized by delusional fantasies of wealth, power, or omnipotence.
2. An obsession with grandiose or extravagant things or actions.
More will be posted about this in  the coming, summer months as Beck’s big August 28th event in Washington approaches when he is going to reveal The Plan for the next 100 years, a plan, Beck claims that was given to him by God. There’s no megalomania here folks. Keep on moving.
Beck exalts Big Government project of the 196o’s
Beck wrapped up this program with a look back at 1969 and he juxtaposed two events of that years: the Apollo moon landing and Woodstock, the music festival held in upstate NY.  The latter was characterized repeatedly as “sex in the mud,” and he made no mention of the musical line-up of that festival.

He talked at length about how great the Apollo moon landing was, about how people stood around their TVs, even out in front of a Sears store, watching this remarkable, historic achievement. 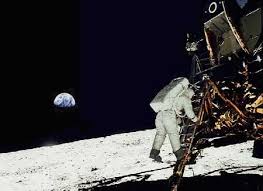 That Beck wants to show a contrast of two events in America which took place that year is fine. That he distorts what Woodstock was about is just how Beck discusses the past; nothing new about that. However, a more accurate juxtaposition would have been Woodstockand the Vietnam War.  Good, patriotic Americans were variously supportive or opposed to American involvement in Vietnam, but Beck instead veered in his arguement away from the war going on at the time and instead waxed elegant about the Apollo moon landing.
What’s astonishing about this? 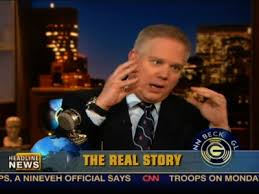 First, Beck was exulting a very expensive, very big government project. This, of course, is coming from a man who exults the advantages of minimalist government and deplores any and all big government spending unless he wants to make some point, in this case about the America of 1969.
Second, Beck often deplores the involvement of the Apollo Alliance in its writing the Recovery Act and in working to envision the Chicago Climate Exchange, part of Beck’s conspiracy theory he dubbed “Crime Inc.” See Joel Rogers’ Answer Exposes Beck’s Crime Inc. for more on this.
The mission of the Apollo Alliance is:
The Apollo Alliance is a coalition of labor, business, environmental, and community leaders working to catalyze a clean energy revolution that will put millions of Americans to work in a new generation of high-quality, green-collar jobs. Inspired by the Apollo space program [emphasis added], we promote investments in energy efficiency, clean power, mass transit, next-generation vehicles, and emerging technology, as well as in education and training. Working together, we will reduce carbon emissions and oil imports, spur domestic job growth, and position America to thrive in the 21st century economy.

That Beck can embrace a big government project of choice, i.e., The Apollo Moon Mission, but turn a blind eye toward the need for a big government project of urgent need to sharply curb greenhouse gas emissions is astonishing if not predictable. It is another double standard of Glenn Beck. Beck’s supporters, Beckerheads, need to explain this apparent contradiction in Beck’s thinking.

Post a Comment
All Comments Approved
Free Speech is Practiced Here
———————————————————————–
Get Involved for 10 Minutes
Share this URL
http://sharethisurlaboutglennbeck.com
Thank you
Posted by The Glenn Beck Review at 9:54 AM