Beck claims to be radical revolutionary


Last Friday on his radio program, Glenn Beck declared himself to be a radical revolutionary. It was recorded by Media Matters. Take a listen.

Beck conveys two false ideas, 1) that President Obama is a "revolutionary" and 2) that Glenn Beck is radical revolutionary. If Obama is such a radical or revolutionary, as Beck claims, why are progressives so disappointed in him (as Beck himself showed on his magnetic chalk board last week)?

Progressive academic, David Michael Green, is the author of The Regressive Antidote. Green's views of the Administration have been used in the past to demonstrate the absurdity of Beck's claims about President Obama, and the following comes from his article, "The do-nothing 44th President." Pardon the uncontrollable line spacing from blogger.

Barack Obama has five major problems as president. The first is that he doesn’t understand priorities. The second is that he seems to have little strong conviction on any given issue. The third is that to the extent he stands for anything, it is for maintenance of a status quo that continues to wreck the country in order to service the greed of a few oligarchs. The fourth is that he fundamentally does not understand the powers and the role of the modern presidency. And the fifth is that he maintains the worst communications apparatus in the White House since Jimmy Carter prowled its corridors. In fairness to his communications team, though, he has given them almost nothing to sell. You try singing the praises of bailing out Goldman Sachs one hundred cents on the dollar, or of a health care plan that forces people to buy plans they don’t want from hated insurance vultures. It ain’t easy, pal. Yet, on the other hand, Bush and Cheney had far less than nothing to sell when it came to the Iraq war – indeed, they had nothing but lies – and their team handled that masterfully. [Emphasis added]

Refuting Beck's claims continues with another look at the mandala of political taxonomy (ordering) below. Beck makes this claim not only because he has had virtually no post secondary education but also, to be fair, because highly educated reporters and pundits often refer to reactionaries as "radicals." He doesn't understand basic political theory. As displayed on the mandala below, Glenn Beck is a regressive reactionary. He's not even a counter-revolutionary because there's been no revolution. His side lost the last election, and Beck refuses to accept the will of the American people. 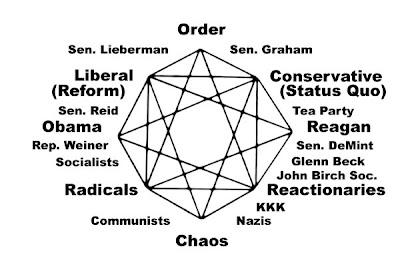 political taxonomy
Beck and his reactionary Tea Party do not have the support of the center of the American people. People want government protections from corporate abuse, corruption and indifference to the public interest. If he believes that a hypocrite who in fact does not tell the truth is going to be trusted to lead the country in any direction; he vastly underestimates the good sense of most Americans. (Beck's hypocrisy and deceit are proven in previous posts that can be found in the blog contents.) Beck has not figured out that you can fool only some of the people all of the time. The people he does fool, like the lady on the phone, have not taken the time to research his false claims

Worse Beck's "revolutionary" rhetoric seems to be inciting violence with his unfounded paranoia and absurd and false claims about the Obama Administration, progressivism and big government. From News Hounds is a story about a California gunman who allegedly fought a gun battle with police. From that story:


California police have now identified the suspected targets of Byron Williams, who allegedly fought a wild gun battle with police on Sunday following a routine traffic stop. Oakland police Officer Jeff Thomason says Williams was on his way to San Francisco to take out his frustration on the Tides Foundation, a regular and constant target of Glenn Beck and the ACLU, one of Fox “News’” favorite boogeymen. Police have also said that the underlying motive to attack these two Progressive organizations was that Williams allegedly wanted to “start a revolution.” His mother had earlier told reporters that he was angry at “the way Congress was railroading through all these left-wing agenda items” and that he felt “the people of this country are being raped by our government and politicians.”

Beck or anyone else at Fox "News" probably will not cover this, but he needs to stop inciting violence with his deceitful fear-mongering, yellow propaganda and mean-spirited and ignorant hyperbole.  He needs to, but he most likely will not. Beck cannot - by definition - be or become a "radical revolutionary." If this "revolution" that Beck is sparking continues, he could end up imprisoned and rightly so.

Posted by The Glenn Beck Review at 1:44 PM

Victor, I like how you used Sarah Palin's new fake word, "Refudiate." Was this done on purpose?

No. The word was used on another blog, and I didn't realize that it was used as a way to mock someone.

I have changed the word to conform to the English language.

How Ironic...who wants the riot? Beck or Beck?

Over the past few weeks I've been contemplating your blog, which is well researched and well written. Here are my conclusions...

You are right! Beck is not the most credible person and is an 'Entertainer' - making millions and delivering exactly what a sector of the public wants to hear.

But, I am also right! Beck is right with many of his general points - which is scary! You can pick apart a number of his specific details and words, but you cannot refute that the current Administration has a dark cloud hovering above... Beck is posing a number of unanswered questions that frankly, should be the focus of criticism.

I notice you avoid the subjects of ethics, Obama's staff and their past radical activism, and other core positions that Beck takes.

As I recall, he was not a fan of Bush or McCain. I'm not sure what election his side lost... I take that back. His side hasn't had a candidate for twenty five years.

We'll see what the public says this fall!
Thanks for keeping the discussion alive,

Hey Collin, thanks for dropping by. Let me respond to two points. 1) What cloud is hanging over the Administration? I would point to Afghanistan in light of the WikiLeak releases, but Beck hasn't mentioned the biggest story of the week, if not month. I would also discuss the deficit as a dark cloud, but until the economy turns around and tax revenues increase, there is not too much to do about it. Gut the demand side of the economy (social programs) and the recovery could stall. There is a move afoot to curb the "global reach," but there is a vested interest, many of them, for maintaining world-wide hegemony. So what dark cloud?

I can't answer questions on behalf of the Administration although I have asked for that assignment.

You mean to tell me that there hasn't been a Libertarian candidate for President "for twenty five years?" Was Ron Paul not reactionary enough?

Protecting the public interest does not either curb personal liberty or doom the economy. You listen to Beck too much.

Corey, I missed this as the comment was initially cleared, but in hindsight I have come to understand that you're pointing to another example of hypocrisy.