Cleon Skousen was a right-wing crank whom even conservatives despised. Then Beck discovered him. 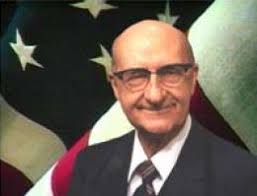 W. Cleon Skousen
By Alexander Zaitchik (reprinted here with permission of the author)

On Saturday, I spent the afternoon with America’s new breed of angry conservative. Up to 75,000 protesters had gathered in Washington on Sept. 12, the day after the eighth anniversary of the World Trade Center attacks, sporting the now familiar tea-bagger accoutrements of “Don’t Tread on Me” T-shirts, Revolutionary War outfits and Obama-the-Joker placards. The male-skewing, nearly all-white throng had come to denounce the president and what they believe is his communist-fascist agenda.
Even if the turnout wasn’t the 2 million that some conservatives tried, briefly, to claim, it was still enough to fill the streets near the Capitol. It was also ample testament to the strength of a certain strain of right-wing populist rage and the talking head who has harnessed it. The masses were summoned by Glenn Beck, Fox News host and organizer of the 912 Project, the civic initiative he pulled together six months ago to restore America to the sense of purpose and unity it had felt the day after the towers fell.

An extended version of this article is available in Alexander Zaitchik‘s new book, Common Nonsense: Glenn Beck and the Triumph of Ignorance.

You are ridiculous sir. You can't claim anything in and of itself in the book is incorrect. If you found it, you would certainly have posted it. Maybe you never actually read it.

Instead you attack the author and those who promote it. You use a obviously slanted Salon.com article to promote your agenda. Please sir garner your own opinions based on fact and then do so with facts not accusations.

Brad, you obviously missed what was written on the very top: this is Alex Zaitchik's work. You need to take your issues about Skousen up with Zaitchik, but I'll tell you this: Skousen's ideas were even rejected by the LDSs, and he was a racist.

You tell me what is honorable about Skousen.

I assume that you're writing about The 5,000 Year Leap of Faith, the book written by a known and undebatable racist. That alone makes everything Skousen wrote suspect at best.

The only "agenda" I have is to expose Beck as a liar, a hypocrite and a fraud. This is backed by research and documentation. Apparently, you're one of Beck's tools.

t babe, I know. We said the exact same thing during the Reagan Administration. This time you're in the streets and I'm watching comfortably from my lounge chair.

This post is old so not sure I’ll get a response. If his is moderated I may not appear on it at all.

But I can find factual error in Skousen, starting with the thing few talk about. Skousen says Monarchy is a Left Wing ideal, and lumps it in with Communism and Fasism, and refers to it as Totalitarian.

Most Monarchies were not Totalitarian, but Decentralised. No Monarchy is Left Wing.

Monarchy is by definition Right Wing. The entire existence of the Left-Right divide came into existence in the French revolution, with the Jacobins called Left Wing or their Republicanism and attempt to tear down the Monarchy, Aristocracy, and Church, and the Right Wing holding fast to them and Traditional order.

Skousens definition of Left and Right is the exact opposite of History.

His whole book proceeds from there.

Monarchy is mot the same sort of thing as Communism, the two are polar opposites. Monarchy is about Traditional Authority, hierarchy, and Customs and usually rules in conjunction to a belief in God. Communism is a Humanistic and Atheistic Ideology ( at least in the Marxist views held today) that adamantly insists on the total equality of all persons and the ultimate power is derived from the People.

The Left is all about creating an Egalitarian Society based upon Democratic means. That’s why Communists form “Peoples Republics.” its actually closer to the American Founders than Monarchy. It should be as both are from the ideas of John Locke and the Enlightenment.

By the way, before I am asked, I’m not a liberal. I am a Conservative. I am also a Monarchist. I am English.

I can also assure you that it’s the left Wing that has always striven to remove the Crown form Power, not the Right. Though today Dave Cameron does the same, and is no True Tory.

But that is secondary.

You asked for something that is wrong in Skosens book, and this is one thing that’s factually in error and that is indisputably false in his book, “The 5000 Year Leap”.

There’s more if you want.

I am interested in more factual errors that you can find in 5,000 Year Leap. Tell us more.